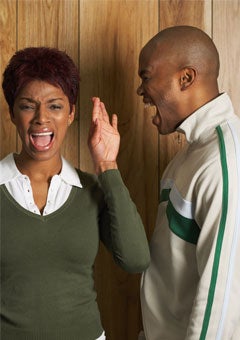 Watching my sister stay in an abusive marriage is one the most enraging, yet powerless, experiences I’ve had to cope with. She’s been with her husband for several years and seemingly has no plans to leave.

I don’t think her husband will fatally injure her, but the damage to her sense of self-worth already seems irreparable. Worst of all, she received the unhealthy message that it’s okay to stay with an abusive man — from the most trusted source a woman can have — her momma…

To outsiders, our mother seemed wonderful. She was pretty active with us in school. She treated our friends well. She made sure we had the latest fashions. While I appreciated my mom’s dedication in some aspects of our lives, I grew to loathe her due to the poor decisions she made at home.

My earliest memories of my parents fighting seem like a movie. I have slow-motion images of them yelling and shoving each other. From my knee-high perspective they seemed like battling giants. I initially viewed their matches as fair game, after all, they were both adults. That all changed the first day I saw my mother cry. During a particularly nasty argument, my dad punched her — I’m not sure whether he’d hit her so aggressively before, but it was the first time it was done in front of me. It was then I realized he was hurting her. My relationship with my parents was never the same.

I couldn’t understand why my mother chose to stay with anyone who hit her, especially since she made it clear that we shouldn’t hit or be hit. In addition, I couldn’t believe my daddy — the same man who took us to the park and cracked me up with his silly jokes — would punch the woman we all loved most. Though the volatility of my parents’ relationship peaked then waned, they never split. Over the years, I watched their interactions morph from physical to emotional abuse. Still, they’ve accomplished a feat few other couples can tout: They’ve been married for 30 years.

I’d be lying if I didn’t cop to holding onto some of my parents’ dysfunction. I’ve been in more than one relationship where I’ve been spoken to in a manner that made my skin crawl. I’ve even had boyfriends who’ve embarrassed me in front of friends and strangers alike, by calling me out of my name or emotionally exploding over minute events. A few years ago, I decided to get therapy. It changed my life. I realized that while I despised my dad’s behavior, I often picked men like him. It was comfortable. It was familiar. It was unhealthy. Breaking that pattern has been a challenge, but it is working.

Despite my strides, I fear for my sister. She is unwilling to try counseling and uses my parents’ “successful” relationship as a testimony to what is possible. While she declares that she is happy, I know better. Even worse, watching her crumble as she second-guesses herself and attempts to anticipate what may agitate her husband, is incensing.

Today I am balancing the move past old hurts while coping with new ones. I’ve had to let go of my anger toward my parents for subjecting me to such trauma, and accept that all adults have the right to make choices. Personally, I chose not to interact or co-sign on abusive relationships by breaking the unofficial vow of silence. I’ve informed my sister and her husband that he is not welcome in my home, and if I see evidence of or witness abuse, I will report it. I’ve done my part. She has to do the rest.