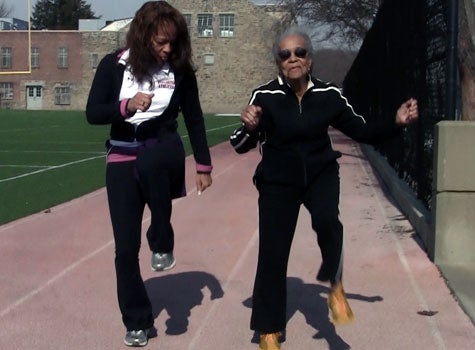 Ida Keeling says she running from old age — and boy is she winning! A spry 95-year-old great-grandmother who lives in New York City recently set the record for her age group at a track meet in Manhattan — running 60 meters in 29.86 seconds.

It’s all the more impressive when one considers that this velvet-voiced nonagenarian didn’t start running until she was 67 years old. She weighs 83 pounds and stands four feet six inches tall — but she has an infectious quick wit when folks ask her how she does it. “It’s not the age — it’s what you do with the age — age ain’t got nothing to do with it!” Keeling snaps.

And Mother Keeling is a powerful example of what you can do — if you set your mind to it. Her body is wracked with arthritis and her small strides just barely get her past the finish line, but Keeling is on a mission to prove that “she’s no old lady.”

One might assume Ida Keeling’s been running since childhood. Not so. She started when she was 67 years old — and her track career was born out of tragedy. One of her sons was murdered in cold blood. Two years later – another son was brutally killed. Both of their deaths were drug-related. That awful one-two punch nearly immobilized her with grief.

But her daughter, Shelley Keeling, a professional runner, says she encouraged her mother to work through her agony by hitting the pavement. “When that second brother was murdered, my mother’s pressure was 206/106 and I remember saying to her you have four kids, but I only have one mother — you’re going to have to do something” Shelley said.

Ida Keeling turned her grief into glory and became an international sensation as the “World’s Oldest Sprinter” and she takes pride in being an inspiration for the young and old alike. “When you are sitting around doing nothing — you get that old feeling — when I feel that feeling coming on, I’m up and out!” she says.

Up and out! Ida Keeling says she can’t wait until she celebrates her 100th birthday, where she hopes to set yet another sprinting record.

“This sister is going to keep on keepin on” Mother Keeling tells admirers with a chuckle.

Folks in her glowing and warm presence can’t help but giggle with her and tell her to “Run On.”
Cheryl Wills is an anchor on NY1 and is the author of “Die Free.”