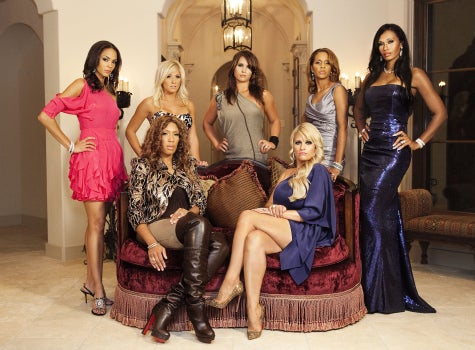 Last night, the second episode of VH1’s “Football Wives” series aired, and many tuned in to see how the wives of the NFL would stack up to the overly dramatized “Basketball Wives” VH1 aired back in April. After taking a glance into the lives seven women featured on the two episodes, it’s safe to say “Football Wives” trumps “Basketball Wives,” if not for the fact it’s simply easier to watch. We all know how reality shows can be train wrecks, but if picking the lesser of two evils, “Football Wives” wins. Not to say we won’t see the typical petty flareups, forced makeups, sensationalized “major” events, and air of glamour in the mix, but the NFL wives of Dallas look better than their NBA counterparts for many reasons, and here’s a quick nine: 1. With the exception of one, they are really wives. Unlike the baby mamas, ex-girlfriends, stalkers and ex-wives cast for “Basketball Wives” (BW), these ladies, with the exception of Brittany Pigrenet (girlfriend of David Buehler), have rocks on the ring finger of their left hands. 2. Their husbands play the game, more than they play their wives. While “BW” centered more around the men in their lives playing the infidelity game, the men in “FW” are more concerned with playing football. 3. Football wives seem more morally sound than the Basketball Wives. After viewing the first episode we noted Amanda Davis censoring herself from using the word “hell,” Melani Ismail giving big shout-outs to Jesus, and all the football wives attending Bible Study. Seeing any of the basketball wives, Susie in particular, at anything remotely close to Bible Study would be blasphemy! 4. Pilar Sanders is a beauty to watch. Former model and wife of football personality Dion Sanders, Pilar found reality success with the run of her first reality series, “Deion & Pilar: Prime Time Love” in 2008. A mix between Pam Grier and Traci Bingham, Sanders is amazingly gorgeous and knows how to work the reality cameras. 5. Chanita Foster is the new Nene Leakes. When Chanita wife of former Cleveland Browns player George Foster, declared in the heat of an argument, “I’m about to turn into the other Chanita. The Chanita from Detroit,” we immediately knew, like Nene, she would be the reason many of us tune in. 6. The drama isn’t as fabricated. Reality shows are far from being completely real, but at least the “unscripted” scripted drama for “FW” already feels a bit more believable than having “BW” cast member Evelyn confronting a stalker about a relationship that ended eons ago. 7. The football wives have homes, not just shoes and bags. These NFL women manage homes with their husbands and children, not just houses filled with clothes, cars, and basketball wife Jennifer Williams’ signature huge drop earrings. 8. Many of the women, in addition to being a football wife, actually have real deal jobs. With a lawyer, jewelry designer, even a bartender, the Football wives are way more self-sufficient than the Basketball Wives who were content attending parties, restaurants, and talking about each other. 9. The show reminds how much we are looking forward to BET’s “The Game,” to return to TV. Football. Drama. Melani and Derwin. We can’t wait until January!