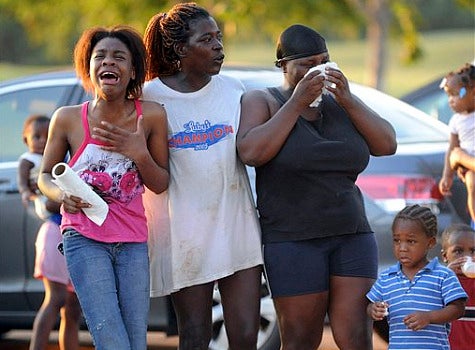 It’s a very sad day for two families in Shreveport, Louisiana who are mourning the deaths of not one, but six of their family members. Yesterday, six Louisiana teens sank to their deaths in Shreveport’s Red River while at a cookout. What was intended to be a large gathering of family and friends, including a few adults and roughly 20 or so children and teens, ended in tragedy. Playing in very shallow water by the river’s edge, the teens stepped from the shallow water into an 18 foot underwater sinkhole. It quickly became a unfortunate chain of events as each of the six teens stepped into the chasm, dying one by one as they tried to save each other. “They were yelling ‘Help me, help me. Somebody please help me,'” said Marilyn Robinson, a friend of the victims, who witnessed as five males and one female disappeared under the water. Recalling the events to the Shreveport Times, she added that since she herself didn’t know how to swim, “It was nothing I could do but watch them drown one by one.” None of the teens, all 13 to 18 years of age, knew how to swim. When authorities and an ER crew arrived, they were able to rescue a 14-year-old from being the seventh to meet an untimely death. The area on the river is a spot for cookouts and wading in the water, and has never before experienced anything similar to this. According to research done by ABC News, 70 percent of African-American children have little to no swimming ability, compared to 40 percent of White children who cannot swim. The disproportionate number of drownings among Black youth compared to White children, along with tragic incidents like this, prove that knowing how to swim is imperative to the safety of our children.