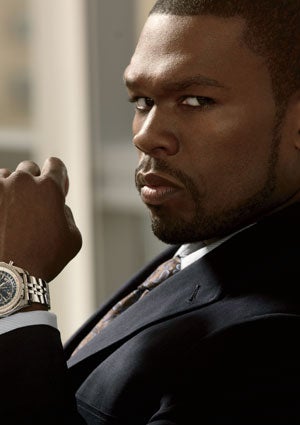 This week, November 5 to be exact, Macy’s stores will launch a new men’s fragrance, Power by 50 Cent. Why am I sharing of this? Well, for two reasons: One: It’s rare that I actually like the scent of a department store fragrance and Two: 50’s foray into the zillion dollar fragrance world is a little unexpected, don’t you think?

I believe most of the beauty editors were a bit curious about seeing 50 talk about cologne. A few months ago, we were invited to a swanky Meatpacking District club to hear his official announcement. As he addressed us girls, he paused for a minute, looked down, grinned, then looked up again and stated that he couldn’t believe he was nervous. He continued to point out that he easily performs in front of thousands, regularly, but hadn’t felt this way in a while.

As they passed around the scent wands, I noticed the favorable nods and surprise. It didn’t smell like everything else. It has a nice mix of citrus, spice, and musk. That may sound unoriginal, but when you stop by Macy’s this week you should give it a whiff. I’d actually wear it myself, so it really isn’t too musky.

During my two-minute interview time, I learned that he’s worn fragrances by Ralph Lauren and Creed. And like these scents, he really wanted his fragrance to have an original beat. Curtis said he enjoyed all the back-and-forth that was involved in getting Power just right. Regarding the name, “For me power isn’t just something you learn on the street or in the boardroom–it’s a way of life. I really wanted to bottle up the rush it gives you so my fans can make it a part of their lifestyle,” The Eau de Toilette is $50.50–really, the 50 cents is in there. Check it out.