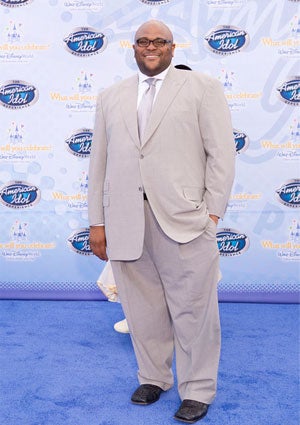 Since winning season two of “American Idol,” Ruben Studdard has been pretty busy, but he still managed to find time to give back to Disney’s Dreamers Academy. He joined 110 high school students for a trip of a lifetime. ESSENCE.com’s Managing Editor Emil Wilbekin caught up with the R&B vocalist to talk about why it’s important to inspire America’s youth, what advice he would give to kids who get a big break and more.

ESSENCE.com: Why is it important for you to be here to inspire these young people?
RUBEN STUDDARD: First of all, it’s our responsibility as a community to instill in young people a lot of the things that we learn through our life experiences. Part of the reason why our kids are doing so badly in so many places is because people don’t take the time to do things like this. For me, it’s a blessing to have somebody like Steve Harvey and Disney want to do things for our kids and give them something that will inspire them to continue to dream. Some young people, especially in the inner-city school systems, have lost their desire to even dream past where they are. I go to a lot of the schools in the rural areas of Alabama to talk about my [music] camp, and some kids don’t even feel like they can make it past where they are. To be able to come here and see people that have matriculated through the public school system and have gone on to do exactly what they set their mind to do is great for kids to be able to see.

ESSENCE.com: What was your dream growing up?
STUDDARD: My dream was to do exactly what I’m doing right now. It’s really great for me because every time I get to do something like this, it shows me how great God’s power is over my life. There were countless nights I prayed and asked God to give me this. I did the traditional things and I had demos but none of that seemed to work. When I was at the end and not even thinking about or trying to pursue music professionally, that’s when “American Idol” happened. I must say that even sitting here talking to you is really the icing on the cake for me because I asked God for specific things. I can remember as a child saying to myself, ‘I can’t wait until my first album comes out,’ and ‘I can’t wait until I can be on the American Music Awards.’ Well, all of those things I’ve already done and now everything that I do after that is extra.

ESSENCE.com: That’s fantastic. When you were trying out for “American Idol,” what was going through your mind at that time?
STUDDARD: Well for my first audition, I really wasn’t supposed to even audition. I actually just went to support one of my friends who was a background singer for my jazz band. She begged me to come to Nashville with her. When I went, something told me, ‘Don’t leave Nashville without auditioning for this show.’ So for my first audition I was the only person in the room out of a group of 10 to be chosen to go to the next level. I don’t even believe they heard me sing because it was over so fast. I was only singing for eight or nine seconds. I sang “Never Too Much” by Luther Vandross. My first time in front of Randy, Paula, and Simon was the only time I was ever really nervous during the whole process. It’s Paula Abdul. I think every young man had a poster of her in his room and I was no different. For me, being in the room with her made me shake, but I got through it. It was an outstanding experience. And my brother was with me.

ESSENCE.com: What advice would you give young people about how to sustain a career once they’ve had a big break?
STUDDARD: The one thing that I’ve learned is that I love to study the careers of people I want to be like. People oftentimes ask me, ‘How do you feel since your first and second album were so big and these last two you had were not as big but you’re still around?’ But when I look at the careers of people I want to be like, such as Luther Vandross or Aretha Franklin and everyone else that I want to pattern my career after, they had some peaks and they had some valleys, but they stayed around. That’s the thing I want to do. I want to have the ability to keep putting out music and God has really blessed me with that ability. I’m working on my fifth album now and I should be releasing a new single really soon. I’m just really excited that God keeps giving me the opportunity to stay around and stay in people’s faces.

ESSENCE.com: What’s the best advice you’ve ever received?
STUDDARD: My mom’s advice was really practical. Both of my parents were school teachers. My mom would always tell me that preparation determines your destination. I remember vividly telling my mom, ‘I’m about to leave college and try to be a star.’ And she would say, ‘Well, you can sing in college. You’re already singing in school. You don’t need to leave school.’ I was a vocal music education major and the way she reached her goals in life was through education. That really prepared me because I’m always ready. I know more songs than everybody. People can’t stump me on things. So I would say the best advice I got from my mama was to always be prepared.