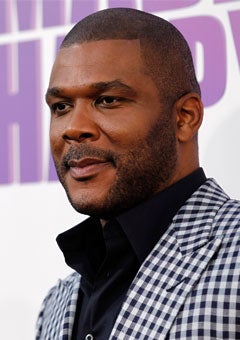 ESSENCE.com: “Madea’s Big Happy Family” was originally a play. Was it easy to translate it onto the big screen?
TYLER PERRY: What is great about a lot of things I’m experiencing right now is that I feel like there is so much more that Madea wanted to say so it’s pretty easy to do. On stage you’re limited on what you can do and what you can show but in film you’re unlimited.

ESSENCE.com: What kind of message do you want to send about Black families and Black love with this film?
PERRY: Not just Black families but all families, we all have issues, we all going through things and we all need a Madea to straighten it the hell out! I think that it says that love is not easy. We all have issues in love and life — especially in love. Because if you put two broken people together you’re going to end up with a broken relationship. And this movie speaks to the possibility of working things out.

ESSENCE.com: There’s a really poignant point in the film where Madea gets on her soap box and explains that between the ages of 40 and 50, a lot happens in a person’s life. She says you’re taking care of your ailing parents, taking care of your children who’re acting out, you’re going through a midlife crisis or menopause and it’s enough to break up any marriage. But you’ve got to hold on. Where did you get that source of inspiration from?
PERRY: I wish could I tell you that it came to me, but I actually heard T.D. Jakes say that when we were talking one day and I asked him and said, ‘I really need to use that.’ I added on to it but that is exactly what happens in those 10 years in life and it’s a difficult time. But it’s a time where we should all try to come together instead of being pulled apart.

ESSENCE.com: How did you go about picking out the cast for this film? How did you know who was right for what role?
PERRY: These days it’s pretty easy. You can pick up the phone — there’s very few people who won’t take my calls except Diana Ross. She won’t take my calls. But Bow Wow is really great. His work ethic is awesome, he’s a really good actor. He’s got a shot of doing really well in this business. I just wanted to show people what he can do. Isaiah, I wanted him to do a scene and wanted him to do something different to show people he’s more than the Old Spice man. Lauren London is great too. Working with that whole age group — I’m 41 and I feel like I can be Dad to them — to have their eye gets so wide to see the studio and the possibility to see how professionally how everything is run. I think it really moved them to another level in their lives.

ESSENCE.com: Where is your source of inspiration, where do you get your ideas for characters from?
PERRY: I’m Black and I live around Black people. There’s always a story around me. I’m Black and I have Black family. There’s a story to be had every five minutes.