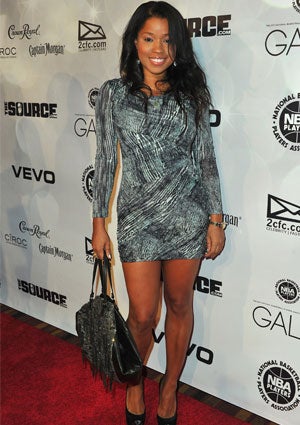 They held hands on red carpets and locked lips in paparazzi shots. They were picture-perfect. Mashonda, her then-husband, Swizz Beats, and their beautiful son were Cosby show lovable. She was the girl that girls wanted to be, and he was the kind of man women wanted to have. They seemed happy until one day they weren’t. It had been ten years, and then it began. One of the most public divorces the blogosphere had ever seen began to unfold. From radio to the web, everyone had something to say about the once, seen but not heard, wife of Swizz Beats telling her side of the story. Then to add flames to the fire, there was the emergence of a new woman in Swizz’s life, Miss Alicia Keys.

It’s been about a year since the ink has dried on the divorce papers and Swizz has been remarried. Mashonda’s been pretty busy, too. She stars on VH1’s newest reality show “Love & Hip Hop” alongside former G Unit member Olivia, and her good friend Emily [mother to rapper Fabolous’ child]. And this time she’s dishing out advice and using her own story as a cautionary tale. But she’s not bitter; she’s better. She overcame the unthinkable and all she can say is “I’m blessed.” ESSENCE.com caught up with the soul survivor to talk about “Love & Hip Hop” and life after Swizz.

ESSENCE.com: Are you anxious about people seeing you on VH1’s “Love & Hip Hop?”
MASHONDA: I’m a little excited and a little nervous. I’m feeling a little crazy. I feel like this is totally different because it’s a reality show. It’s been something else all the other times. People get to get in and they get to see first hand the words coming out of my mouth. It’s fun though. When I watched the trailer the first time, I held my breath. I couldn’t move. I couldn’t breathe. But when I watch other reality shows I don’t think ours is like so off the chain. I think that women will watch ours and actually get a message. It’s more of a sisterhood.

ESSENCE.com: On the first episode we hear you say “You saw me fight for my family and it got me nowhere.” What did you mean by that comment?
MASHONDA: That day Emily was so hurt and emotional when we were having that lunch and she said to me, ‘You know, I just want my family. I want to fight for my family.’ I just felt her pain because that’s what I thought I was doing. At the end of the day, when you’re someone’s woman, when your someone’s wife or even when you just have a child with someone, you feel like your family is everything. It’s worth the fight. It definitely is but ultimately people are going to do what they want to do. I told Emily its okay to fight but you still have to know when it’s time to throw up the white flag. That was our conversation that day and it made her cry. When she cried, I wanted to cry and it was all emotional. I think I got my point across to her when I said that.

ESSENCE.com: Your friend Emily is in a situation very similar. She’s been with rapper Fabolous for a very long time. What is your advice to her?
MASHONDA: She’s been with him for a good eight years. It’s always that way when there is a kid involved and when you’ve been with someone so long. My advice to her on the show and in our personal lives is always to have your own thing going on. It’s alright to be head over heels in love, but have your own life, your own career, your own circle of girlfriends. Go out and do positive things that can make you better, because at the end of the day if the guy is going to leave, he’s going to leave. You have to have your own thing to fall back on. That’s always my thing — like, make yourself happy. Don’t always depend on him for happiness. I felt like a preacher on the show. I was trying to drill that into her head because I had to learn it the hard way. And I didn’t want her to have to learn it the way I did. So I’m almost overprotective of her on the show. I really do think it helped her a lot. It helped me a lot talking to her.

ESSENCE.com: What do you think of the other ladies on the show?
MASHONDA: I know all the ladies. I’ve known Chrissy [Lampkin] for probably 14 years, we are both from Harlem and we both know a lot of the same people. I know Olivia through the music industry. We were both signed to J Records. Somaya [Reece], I just met through the show. I really took to her and her story. I don’t really know what happened with her on the show with the other ladies but I can’t say anything bad about her.

ESSENCE.com: Are you still upset about how things happened between you and Swizz?
MASHONDA: When you’re in a situation like that and the whole world is looking in, you got famous people involved, and nobody really knows what happened; sometimes it’s just worth being silent and just taking time for yourself. Figuring out what you want to do — just letting it play out. Time is everything in a situation like that. That’s what I did. I just took time out for myself. I got back in the studio. I started taking a ton of different writing classes and Pilates; taking care of my body, my health — just working on me as a person. You have to forgive somewhat because if you can’t forgive you can’t really move forward. I wont lie to you it was really tough the first two years. By the third year I started to feel like “I’m blessed and I can’t really even complain at this point.”