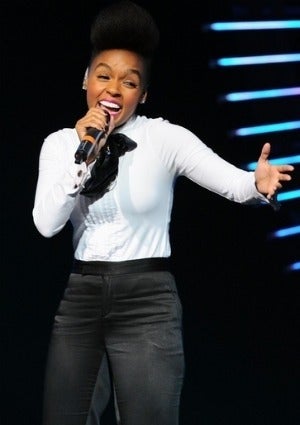 Janelle Monae is one artist who wholeheartedly marches to the beat of her own drum, and we love her for it. With her eclectic blend of R&B, rock and sci-fi, Monae has certainly made her mark, and it’s not only music lovers who’ve had to stop and listen. Monae is also the darling of the fashion world. Just ask Karl Lagerfeld.

On the heels of her two Grammy nominations, Monae is also this year’s ESSENCE “Black Women in Music” honoree. She spoke to ESSENCE.com about the honor, and being mentored by Prince and Diddy. Lucky girl.

ESSENCE.com: You’ve had such a great year. You’ve been nominated for two Grammys, and now you’re being honored by ESSENCE. What does being honored by the magazine mean to you?
JANELLE MONAE: Well, first I want to thank ESSENCE. There are a lot of wonderful beautiful girls doing their thing — making a mark. So to be honored, I’m honored! I don’t take that for granted. I take it as encouragement. This is just the beginning of my career so to be recognized at such an early stage just gives me more encouragement and hopefully I can open up doors for more young girls.

ESSENCE.com: Prince has also supported you a lot. What has that support meant to you?
MONAE: It’s meant the universe. He’s a great friend, and he is also there when I need to talk. He is also a believer in what we do. For him to be inspired by “The ArchAndroid” is really just a beautiful thing. He has inspired me and given me the blueprint as an artist. He has his own box that he runs around in and jumps out of and comes back in. I want to be a better musician not just a singer because of Prince.

ESSENCE.com: Diddy is also your label head (Bad Boy Records) and mentor.
MONAE: He’s a very nice guy and supportive of my ideas and my label, The Wonderland Arts Society. He’s very funny and is really inspired by what it is that we are doing. It means a lot to me because he is also a person that I have looked up to. I admire the longevity that he has and all the many businesses that he has and still oversees. Whenever I need advice, he’s just there. And him just being there is enough.

ESSENCE.com: What do you think is the role of the artist in these times?
MONAE: I can only speak for myself. I think it’s important to be the voice of the people, particularly the working class — those working everyday to make something out of nothing. Music is their drug of choice whenever they feel oppressed or depressed. I want to create music that is uplifting to them, you know, speak for those who are being picked on and discriminated against because of how they look or their sexual preference or for just being who they are. I want to encourage people and those around them to love themselves by giving them an experience, somewhere they can go whenever they want to escape. It’s not just a collection of songs, but an experience.

ESSENCE.com: If you were trapped on an island with five albums to live on forever, what would they be?
MONAE: My album, “The ArchAndroid.” I think it would be good to experience from a third-party perspective. “The Miseducation of Lauryn Hill,” “Songs in the Key of Life, “Innervisions,” and “Fulfillingness First Finale,” by Stevie Wonder.

Janelle Monae is being honored at ESSENCE’s “Black Women in Music” event tonight in Los Angeles.