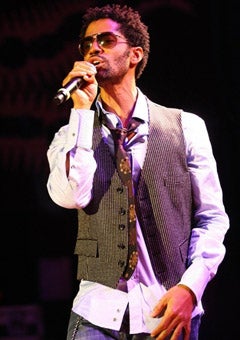 These days, Eric Benet really has a reason to sing. The R&B crooner recently became engaged to Manuela Testolini, former wife of Prince. But Benet, who’ll take the stage during July’s ESSENCE Music Festival (got tickets?), said he had no idea about Ms. Testolini’s previous husband until an idle trip to LAX. ESSENCE.com spoke with Mr. Benet about falling in love, learning heartbreak’s lessons and his biggest new fan, Lil Wayne. ESSENCE.com: Congrats on your engagement! How did you meet your wife-to-be, Manuela? ERIC BENET: We met years ago at a charity event party in Los Angeles and I thought that was it because she was there with a guy. Then my buddy and I went to another event, she strolled in and I discovered that other guy was just a friend. So I got her number and over the next few months we developed an incredible connection. ESSENCE.com: But you didn’t know her ex-husband was Prince? BENET: It was strange, I had no idea who she was married to before. She knew who I was married to … so it was interesting as two people who’d experienced very public divorces. We had a lot in common in terms of dealing with perception [of our previous relationships]. For the first few weeks, she only referred to who she’d been with as ‘my ex.’ Finally, I was driving her to the airport one day and asked ‘Who is he?’ She said ‘You really don’t know?’ and when she said [Prince], I thought about all the other conversations we’d had and I had a strange ‘A-ha’ moment. ESSENCE.com: What lessons have you learned from your previous marriage to Halle Berry? BENET: I’ve learned to be honest with myself and the person I’m with. More importantly, I’m now honest about what’s making me angry, afraid or just bothering me in the relationship. I’ve always been the person that doesn’t complain and that shit right there can bite you in the ass. ESSENCE.com: Lil Wayne’s said that while he was incarcerated your song “Sometimes I Cry” got him through. Were you surprised? BENET: It really touched me. I’ve never been to jail so I can only imagine what that soul-searching, painful period is like but to have him say that something I created gave him comfort is the biggest compliment for a songwriter. That’s why I do what I do. I’d love to work with Weezy. We haven’t had the conversation but it’d be an unexpected collaboration of mutual admiration. ESSENCE.com: What will you bring to the EMF stage? BENET: My music is raw, emotional and real so my live performances are the same way. Every time I step on stage, I’m performing like my life depends on it and I try to give the audience something better than my recorded music.