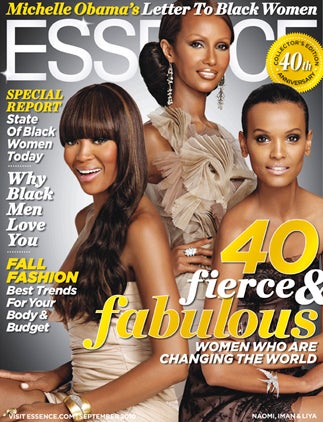 “I learned a long time ago that when you’ve had some success, it’s not enough to just sit back and enjoy it. You’ve got to reach back and pull someone else up too…”–First Lady Michelle Obama When the first issue of ESSENCE arrived on newsstands in May 1970, few guessed that just four decades later the First Lady of the United States would be a Black woman. As the magazine turns 40, we celebrate 40 fierce and fabulous women — including Maya Angelou, Oprah Winfrey, Iman, Serena Williams, Vanessa L. Williams and many more — who have fearlessly given voice to our dreams and paved the way for dreamers to follow. Plus, in “Be Fearless,” take a look at an exclusive message from First Lady Michelle Obama on how ESSENCE has helped to shape her life and yours.