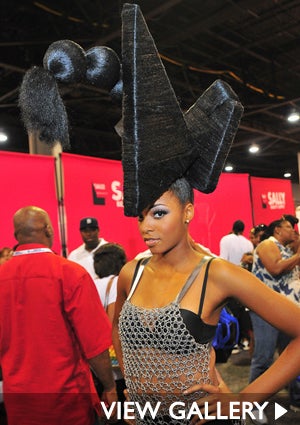 A blue-and-white Oreo bag carved into the side of a head; a purple, four-foot-high “Elvira”-style beehive; and the Guinness World Record holder for the world’s longest dreadlocks. These were just a few of the crazy, hairy — and tad bit scary — jaw-droppers over the weekend at the 2010 Bronner Brothers International Hair Show in Atlanta. The more than 60-year-old trade show, as chronicled in Chris Rock’s “Good Hair” documentary last year, attracts folks from all walks of lock life; literally thousands of stylists, barbers, salon owners, hair models and celebrities from all over the world flock to ATL for the three-day event. In years past, the celeb set has included luminaries like the late Dr. Martin Luther King Jr., Jackie Robinson and Dick Gregory; this year, you were more likely to spot reality TV stars like Derek J. and Dwight Eubanks from “The Real Housewives of Atlanta” milling around.  But the biggest draws are, by far, the live-action hair shows: scissor-wielding stylists whipping up the most bizarre and heavenly creations — all to a hip-hop beat. On Sunday, the Oxygen Network hosted the popular “Hair Battle Royale” for a network special that will air this week. In it, competitors attempt outdo one another by cutting weaves into the most unbeweavable fantasy styles. And while most of the shows are strictly for entertainment value, some strike a somewhat serious chord: To combat growing obesity trends in the Black community, UnitedHealthcare sponsored the show’s first-ever exercise-friendly hair competition this year for (don’t laugh) Black women who don’t exercise because they don’t want to sweat out their ‘dos. U.S. Surgeon General (and fellow sista) Regina Benjamin was the guest speaker. And when spectators weren’t jockeying for a space at one of these heated SRO competitions, they were snapping up every hair product known to (wo)man at wholesale prices; huge vats of relaxers, gel, shampoo, and, of course, the most coveted item — the Holy Grail of any Black hair event — silky, booty-skimming tracks of Indian or Brazilian hair. But don’t let the title of the show fool ya: the Georgia World Congress Center — which is the fourth largest convention center in the United States — obviously holds much more than hair products. Visitors also walked away from everything from knockoff designer handbags and sunglasses to vibrators. They indulged in cheap back massages, bought feathery eyelashes, took natural haircare workshops, and got wig consultations all before heading back into the hot Georgia sun.