By clicking Sign Up, you agree to our Terms of Use and that you have read our Privacy Policy
Skip to content
By Jasmine Grant · Updated December 6, 2020
Forget what you read. Forget what you heard. Wendy Williams is standing by her man. The talk show host just made her long-awaited return back to her show today and addressed every single elephant in the room. The most urgent of which is the looming curiosity about her health, to which she clarifies ““I have a plethora of doctors, and I’m happy to tell you that I am doing swell.” Her opening segment then segued into where things stand with her husband of almost thirty years/manager, Kevin Hunter. “And then you know it’s not a big thing for Kevin and Kevin [Jr.] to come with me for doctor’s appointments. … So we were spending time as a family, the Hunters … and I just wanted to take some time for myself … you know I am my own best friend.” She continued speaking on her marriage, maintaining that despite several reports of Kevin’s alleged affair with another woman, the two of them are on solid ground. “I want to shout-out to my husband. I’m still wearing my ring,” she said. “Believe me you, when you’ve been with somebody for 28 years, married for 25 years … we know each other. He’s my best friend, he’s my lover. … I know what you’ve been seeing and I know what the streets have been talking about.. but hunty, let me show you who I fell in love with and who he fell in love with.” 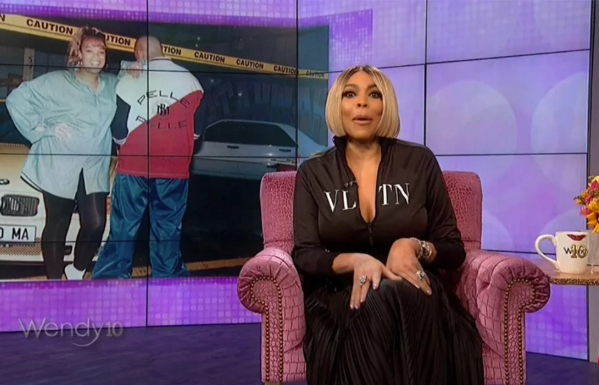 The screen behind her pops up to reveal a throwback photo of Wendy and Kevin from , sending the crowd into a roar of applause, “I’m still very much in love with my husband and anyone who’s been married … you know.” “Marriages have ebbs and flows, marriage isn’t easy. Don’t ask me about mine until you see this gone,” she added, pointing to her wedding ring.  “And it ain’t going anywhere, not in this lifetime.” The Wendy Williams Show resumes today with its namesake host after featuring guest hosts Nick Cannon and Jerry O’Connell. Wendy had been on a medical leave of absence dealing with health issues tied to her graves disease diagnosis.