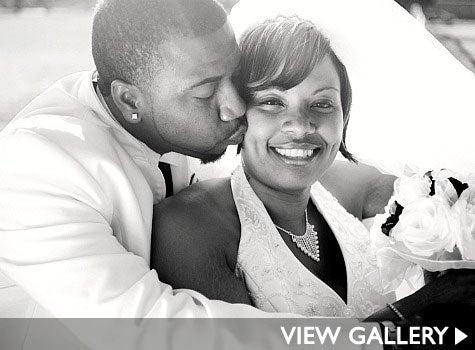 Bride: Yade Diamond, 33 Groom: Jermaine Stevenson, 28 Hometown: Manassas, Virginia Wedding Location: Faith Simple Ministries in Manassas, Virginia Wedding Date: August 7, 2010 It’s Okay to Look Jermaine was just cruising popular online dating site Singlesnet.com when he found Yade’s profile. He clicked through her photos and left her a note with his phone number. They e-mailed back and forth for a while and then decided to meet, but neither of them expected to fall in love. “I was just curious,” Yade says. “I had never done anything like that. Going on a dating website, I didn’t know what to expect.” “Nobody expects to fall in love from online dating,” Jermaine says. “I never thought it would work out like this.” From Meeting Up to Moving On Out Yade lived in Virginia, and Jermaine lived in Maryland, so she crossed the state line to pick up Jermaine for their first date. When she finally met him, she thought he was better than what she expected. He “was mesmerized.” They continued to stay in touch, talking, texting and e-mailing every day and they traveled to see each other whenever they could, until one day Jermaine decided it was time for him to make that move. “I came down here [to Manassas] for a weekend and she must have made a big impression on me because I’ve been here ever since,” he says. “I pretty much left everything to be with her.” Blizzard of Love Jermaine popped the question to Yade during the blizzard of December, 2009. The two lovebirds were snuggled up at home when Jermaine told Yade that he had to go to work. With 22 inches of snow on the ground and more still falling, Jermaine asked his lady to help him clean off their truck so he could be on his way. Needless to say, Yade wasn’t pleased, but she pitched in anyway. Out in the snow Jermaine pretended that he’d lost his cell phone in the snow. “I get down and I’m digging in the snow trying to find his cell phone and I turn around and he’s on one knee,” Yade laughs. “I was frozen for a minute because he caught me off guard.” “It was great. The neighbors were outside shoveling snow and they looked over while the snow was coming down,” Jermaine remembers. “She said yes and started jumping up and down.” The two hopeless romantics exchanged vows in a local church surrounded by their families. Share their love.