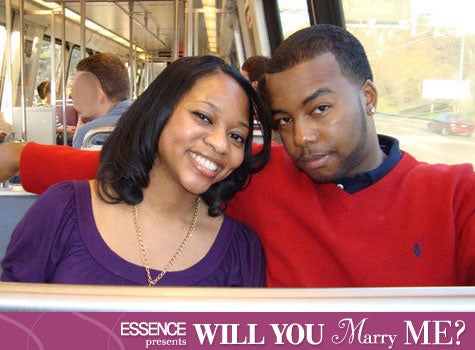 You’ve met the four couples of this year’s “Will You Marry Me?” competition. You’ve watched him propose, you’ve seen her accept. You’ve voted time and again (did you know you can cast a vote every 24 hours? did you know by simply voting you are eligible to win a four-night stay in Maui?) for your favorite, each click bringing that couple closer to winning a dream wedding. You’ve seen their photo galleries, you’ve read their weekly blogs, you’ve heard why you think they should win. Now, let’s get real: This is all about the ladies! Check out our interview with Jasmine Harris, fiancee of Gabriel Sheffield. ESSENCE.com: What was your first impression of your fianc? JASMINE HARRIS: When I first saw Gabe walk through the door at happy hour, I did a double take! I thought he was so sexy! The first thing I did was turn to the birthday girl, Christine, and ask her if she knew him. When I found out she did, I just knew I had to speak to him. I went over to the table and introduced myself. After speaking to him for a few minutes, I realized he was a nice guy, very humble and country… straight from the south! Gabe is huge on first impressions, and he did not disappoint the first time we met.   ESSENCE.com: How and when did you know he was the one? HARRIS: From the start Gabe was a very sweet guy, caring, considerate, attentive, but most of all Godly. We can do just about anything together and enjoy each other’s company. It did not take long for me to fall in love with him, my love was confirmed when he met my family. In my past, my Dad and brother would give guys a hard time when I introduced them. But when I introduced Gabe it was a completely different response, they talked to him like he was a member of the family. I was very shocked but excited that they accepted him.   ESSENCE.com: Was this the right moment in your life to make this commitment of getting engaged? HARRIS: When you find someone you love and want to spend the rest of your life with, any time is the right time to take the next step in your relationship. We are ready to start our life together as husband and wife, and can’t wait to have children running around!    ESSENCE.com: Were you actually surprised by the proposal? Or did you see it coming? HARRIS: This proposal took me by complete surprise. Many who know me, know that I do not like surprises and I ask a million questions. Leading up to the proposal we had to rearrange our flight to Florida in order for the proposal event to take place. Well, once Gabe told me this, I asked a million questions about why we were changing our flight arrangements to arrive in Florida a few days early. Gabe pulled off telling me this crazy story about how he won a contest and I was having a “surprise birthday party” that would be taped and shown on television. Although the story seemed odd, I didn’t have a reason not to believe him.    ESSENCE.com: Were you impressed by the effort he went through to get you two into this year’s Will You Marry Me contest? Does that earn him bonus points? HARRIS: I am definitely impressed by the amount of effort that Gabe took to enter into this year’s Will You Marry Me contest, writing the letter, submitting it on time, asking my Dad for my hand, planning the proposal, and putting up with me asking questions about the dinner. The elements that he involved were well thought out, he actually considered what I would find most special. The poem, having his cousin sing for me, my family being there, all of it was so special and unforgettable.   ESSENCE.com: What does marriage mean to you? HARRIS: I truly believe in the scripture, Proverbs 18:22 “He who finds a wife finds what is good and receives favor from the LORD.”  I feel as though marriage is a bond, blessed by God. When I look at the examples that I had in my life, my parents were the greatest. They exemplify all elements of marriage, the good the bad and the ugly, and at the end of the day they still were able to love each other unconditionally.  As with love, marriage won’t be easy, but who better to take that journey with than the one that I can truly call my best friend, the man I love dearly. ESSENCE.com: What do you think are the most important elements to a successful marriage? HARRIS: I believe the most important elements to a successful marriage are first and foremost keeping God first, remembering why we fell in love with each other, remaining honest, being supportive and understanding, having respect for each other, and keeping the relationship exciting.     ESSENCE.com: Describe the thoughts that ran through your head as he actually said the words, “Will You Marry Me?” HARRIS: I was in total shock when Gabe asked me to marry him, I honestly was overjoyed. Once I finally realized what was going on, I could only think that we were going to be getting married, and I was so excited. NOW VOTE!