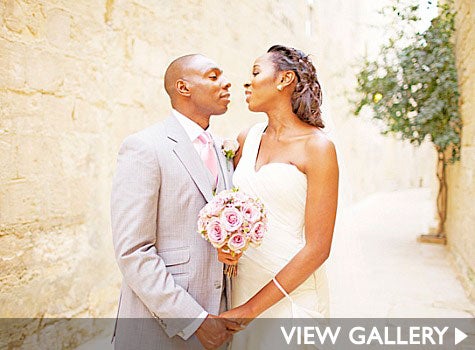 It’s a long story:
Like all of our favorite love stories Viva and Chike’s story is a little bit complicated. When they met in 2004 they were both in relationships. She was living in New York at the time and traveled to London to meet up with her then-boyfriend and ended up on a double date with a friend and her beau — who just happened to be Chike. Both extroverts, Viva and Chike dominated the conversation at the dinner table and became fast friends.

Over the next five years Chike and Viva saw each other through new relationships, break-ups and even wedding proposals — all the while maintaining a platonic relationship. Until one day something changed.

Viva had moved to Nigeria to practice law and was awaiting the results of her bar exam when she flew to London to visit Chike for a week at the end of summer 2009.

“I don’t know what it was but it was just different,” Viva says. “I ended up spending three weeks in London and then we went to Istanbul together. We had such a wonderful three weeks.”

Come Back to Me
When Viva returned to Nigeria, she was filled with questions.

She didn’t have to wait very long to find the answers. Three days later Chike called her to say, “This isn’t working. Either you need to be here with me or I need to be there with you.”

By November 2009 she had relocated to London.

Tradition Rules
In Nigerian culture the groom’s parents customarily visit the bride’s parents to ask for their daughter’s hand in marriage. Instead of the Western proposal, Chike’s father had a chat with Viva’s father and the couple on Viva’s birthday —  February 4, 2010. The ring came one month later.

Viva tells us she had been proposed to twice before and she said no both times. This time she and Chike took the traditional route and the third time was the charm.

What she said:
On moving to London: “I’ve never lived with someone before so it may have seemed like a rash decision but I knew it was just different this time. Everything happened so fast, but everything happened with such surety.”

On always being in love: “I guess we’ve always sort of loved each other. It must have been latent or subconscious. I guess I’d say, I don’t remember not loving him.”

On the married life: “This is not the cliche marriage that I thought it would be. I’m literally living with my best friend. It’s just comfortable. I’m lucky enough to be living with a guy that’s really cool that happens to be my husband. We’re just chilling.”