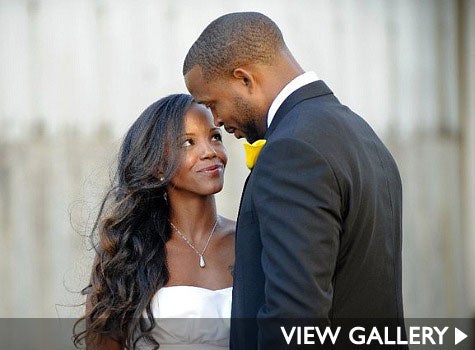 Bride: Tulani Grundy, 33 Groom: Othello Meadows, 35 Occupations: Tulani and Othello — Lawyers Hometown: Omaha, Nebraska Wedding Location: The Foundry at Puritan Mill, Atlanta, GA Wedding Date: September 12, 2010 Friends for Life: Tulani and Othello met in Atlanta while studying for the Georgia State Bar. Focused on their exam and not on love, the two became fast friends. As years went by, they stuck by each other, exchanging relationship advice, meeting up for lunch or drinks, until their chemistry was too strong to deny. “Once it reached that point there was really no turning back,” Tulani says. One night while they were chatting on the phone. Othello asked, “Is it just me or is there something here?” Even though Tulani was caught off-guard by Othello’s question, she felt that something too. Piece of Cake: “When you meet and you start out as friends, your connection is really honest and uninhibited,” Tulani explains. The years that she and Othello spent as buddies allowed them to know each other through-and-through. All that was left was for them was to enjoy each other’s company. “There weren’t any more surprises,” Othello remarks. “It was just really experiencing things together.” Back to the Beginning:  In December 2009 Othello and Tulani, who now live in Omaha, Nebraska, headed back to Altanta to spend the holidays with their old law buddies and reminisce in the city where they fell in love. They visited their favorite restaurant, Rathbun’s in Downtown Atlanta. “I kind of noticed that everyone was being extra attentive that night,” Tulani says. Indeed they were. The couple even had a special visit to their table by the restaurant’s chef, Kevin Rathbun. “Kevin Rathbun is my favorite chef,” Tulani shares.  The couple continued their meal and then it was time for dessert. Out came a bowl of raspberries, compliments of Chef Rathbun. On one of the raspberries sat a diamond ring. Tulani was overjoyed. The festivities were not over yet. Othello suggested that he and his new fiancee stop by Serpas, a bar next door, to share a drink in celebration of their new status. As they walked into the room, Tulani got the second shock of the night. “It was filled with around 50 of our closest friends. My parents even came to town from Kentucky,” Tulani gushed. On September 12, 2010, Othello and Tulani headed back to Atlanta to tie the knot in a chic and modern wedding. Share their love.