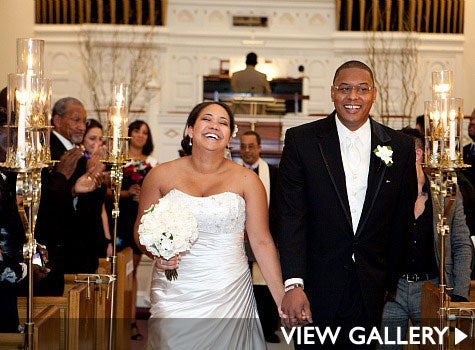 Going to See a Man About a Car
Tisa met Adam at a car dealership in Hartford on January 21, 2007. She had been a working professional for a while and was treating herself to her first brand new car. Adam, who worked at the dealership, saw her walk in and gave up the sale to his friend. He had another agenda. Tisa picked out an SUV and made an appointment to pick it up that Saturday.

When she walked into the dealership that weekend, Adam was waiting for her at the door. He got all of the other employees involved in his case to win Tisa over, each of them asking her if she would give him her phone number, until she gave in and wrote it down. He called her that night.

Two Dozen Long Stem Roses
During their courtship Adam would write Tisa poetry and send her little tokens of his appreciation. He even started a weekly tradition, delivering 24 long stem roses to the bar where she worked every Tuesday evening.

“It turned into a spectacle,” Tisa remembers. “He would come in every Tuesday for four months straight.”

“After the second month everybody would sit at the bar anticipating me coming through the door with these two dozen roses,” Adam adds.

When Disaster Strikes
After four months of dating, Tisa was excited to go away for a long weekend with Adam. She was in a Dominican hair salon getting a blowout when she got a call from his cell phone. It was a paramedic, who asked, “Does Adam have a girlfriend?” She told Tisa that Adam was involved in a head-on collision and that he had broken his forehead and he was being rushed to the hospital.

“I remember driving to the hospital saying, I don’t know what this relationship is, but, God, don’t let him die,” Tisa says.

Adam’s mother showed up to her son’s bedside to find that he was in good hands with Tisa. When the hospital discharged him, he decided to go home with his lady.

For the following two years, Tisa nursed her man back to health.

Gather ‘Round People
After Adam’s recovery, Tisa found out that she was pregnant with a baby girl. Adam had big news for her, too. He had been planning to pop the question for some time and invited both of Tisa’s parents to Connecticut to watch him. Tisa and her mom and dad went to a family friend’s house for dinner and Adam showed up in a suit. The group gathered in the den and Adam got down on one knee.

“Tisa Marie Rabun, will you marry me?” he asked.

Tisa and Adam welcomed their baby girl in May 2009 and walked down the aisle a year and a half later on October 16, 2010. Share their love.