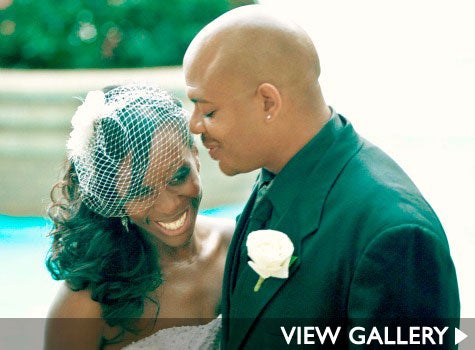 Jump Up and Wave
Ferman spotted Tiana while standing in the crowd at Caribbean celebration Miami Carnival in 2001. She was dancing as part of one of the many bands participating in the event and Ferman’s cousin just so happened to be in her crew. It was the perfect excuse for an introduction.

“He came up to me looking for his cousin,” Tiana says, “and we just hit it off from there.”

See You Next Life Time
Tiana and Ferman tried to date but the timing just seemed off. Although they had great chemistry, Ferman liked to party and Tiana had her head in the books.

“We tried the whole dating thing, but it didn’t really work out at that point,” Tiana shares. “We just kind of lost touch and did our own thing for a little while. It wasn’t until I was leaving for grad school that I became sad that I wouldn’t see him anymore, but I knew that if that was true then we would somehow reconnect down the road.”

Back in Love Again
When Tiana was finished with school she headed back up north to New York City — where she’s from. One day in 2006 she received an e-mail from Ferman asking how she was doing and what she was up to.

“I was excited to hear from him,” Tiana tells us. “I shot him an e-mail right back.”

It didn’t take long for these two to feel the chemistry they once shared again. “Everything came right back, as if we didn’t separate at all,” she gushes. Shortly after their reconnection, Tiana moved to Charlotte, North Carolina — where Ferman was living, to be with him.

The two sweethearts have been searching for the perfect city to share their love in ever since, and most recently settled in Philadelphia.

The Works
How’s this for a warm welcome home? One evening in March 2008, Tiana pulled up to her driveway and found red rose petals leading up to the front door. She was intrigued. When she walked through the door, she saw Ferman wearing a suit and holding a bouquet of flowers.

“I wanted it to feel like we were going on a date,” Ferman explains.

“That’s when I realized what was happening,” Tiana says. “He got down on one knee and asked me to marry him. I definitely wasn’t expecting it.”

Following the engagement surprise, the couple toasted to their new relationship status.

Two years later couple tied the knot in a bright, summery affair on the Washington D.C. waterfront. Share their love.