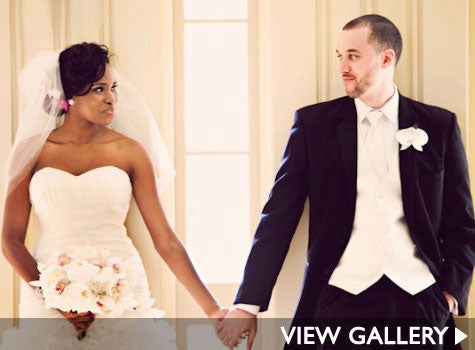 Bride: Teni Osinubi, 24 Groom: David Brown, 24 Wedding Location: Atlanta Botanical Garden Wedding Date: June 27, 2010 Campus Crushes David spotted the girl of his dreams across Duke Univeristy’s quad on the second day of freshman orientation. Then a shy 17-year-old, he pushed his timidity aside and approached Teni. “I was pretty shy, but I went straight up to her,” David remembers. “Apparently, I was completely disinterested,” Teni laughs about her first encounter with David. “I was so disinterested, I didn’t even think he was trying to put moves on me.” Braid My Hair David had a plan to win his lady over. “I would braid his hair and he would go home and take the briads out a few days later and say, ‘Oh, I need them done again,'” Teni remembers. “That was his way of spending time with me.” As David predicted, his hair braiding trick brought him and Teni closer together and in a few months time, they were boyfriend and girlfriend. “It was February 7th,” Teni recalls. “He took me to a restaurant by school. He said, ‘I don’t want to be your friend anymore.’ I thought, ‘Oh my God. What did I do?’ He said, ‘I want to be your boyfriend.’ And that’s how it happened.” The After School Program Teni and David went through their ups and downs during college and even took a break at the end of their junior year. But by the time graduation rolled around they were trying to work things out. After school, David and Teni were both accepted to a Teach for America program in Atlanta. Serendipitously, they were placed at the same school in the same small group of four teaching the same set of children. “It was like, ‘Wow! This could actually work,” Teni says. Back to School Teni’s youngest sister was in her freshman year at Duke University when David decided to propose to his bride-to-be. Teni had an interview at the University of North Carolina’s medical school and David suggested that he travel to NC with her to visit some of his old fraternity buddies. After her interview David and Teni went to Duke to pick up her little sister so they could all go out to dinner. Walking through the freshman campus David began to reminisce. “We passed by the quad and David says, ‘This is special. This is the exact spot where we met,'” Teni remembers. “I’m thinking, ‘Babe, you are so corny.’ Then he starts rubbing my hand and by the time I realized that something wasn’t right he was on his knee and I was crying.'” “I don’t want to be your boyfriend anymore,” David told Teni. “I want you to be my wife.” “Did you ask my father?” Teni asked between her tears. Of course he had. On June 27, 2010, Teni and David tied the knot in a stunning outdoor wedding at the Atlanta Botanical Garden. Share their love.