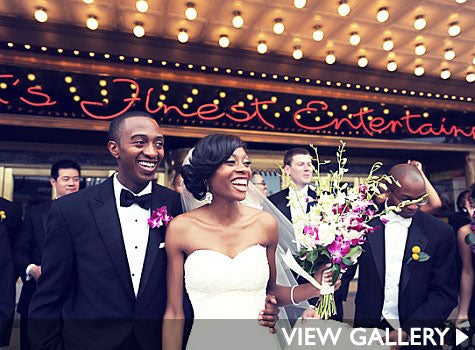 Bride: Rhona Williams, 28 Groom: Justin Taylor, 28 Occupations: Rhona — Assistant Federal Public Defender for Western District of Michigan Justin — First year resident at Northwestern Memorial Hospital Hometown: Chicago, Illinois Wedding Location: Ceremony — Central United Methodist Church, Detroit, MI; Reception — Greektown Casino Hotel, Detroit, MI Wedding Day: May 15, 2010 Dorm Life:
Rhona Williams met Justin Taylor in the halls of the U.S. Capitol building during their internships with the Congressional Black Caucus. She was a sweet sorority girl from Spelman in Georgia. He was a laid back dude from Berkeley in California. After doing almost everything together, from cooking meals in their dorm to working on internship projects, these two realized they were meant to be more than just friends. When Justin got the scores from his MCAT test back, Rhona was there to help him celebrate. She took him out for a drink and got a first kiss in return. Don’t Say Goodbye: After their summer of love, Rhona decided to stay in Maryland and Justin headed back to California to finish his last semester of school. They were devastated. “I think it was about a week after I left that it hit us that we were not going to see each other as much as we wanted.” Justin explained. “I wanted to hold on to it,” Rhona said. “But I didn’t know what long distance relationships were like. Everything about him was everything that I ever wanted. Within a month of him leaving I used a ticket that I won to visit him to California.” A Little Bit Closer:  Justin chose to attend University of Michigan’s Medical School so that he would be on the same coast as Rhona, who would later attend law school at the University of Maryland. “For five years we did the long-distance thing. Southwest Airlines became my best friend,” Rhona joked. “We got together twice a month if we could afford it. We still did everything together. We prayed together every morning and we even did a fast together. It just brought us to another place spiritually,” she continued. “I guess we both traded places in terms of making sure the other was committed,” Justin revealed. The Commencement: Justin’s family flew to Maryland for Rhona’s Law School graduation. After the ceremony, family and friends gathered together at a restaurant in Downtown Baltimore to celebrate. Justin stood up and asked everyone to say something kind about Rhona. When it was his turn he began by saying, “When I think of Rhona, think of cardiomegaly. It’s a condition that people have when they have an oversized heart.”
He continued to shower his love with praises and then got down on one knee and asked her to marry him. Rhona packed up her car and moved to Michigan the very next day. Justin graduated from Medical School on May 14, 2010. On May 15, Rhona and Justin got married in a beautiful family affair in Downtown Detroit. Share their love. Video by Andy Owen.