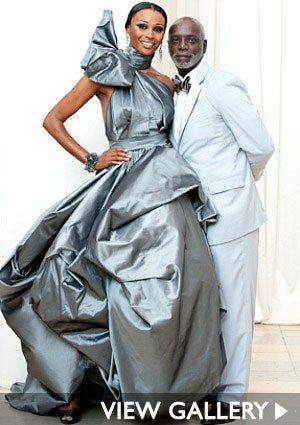 On the Wings of Love:
Cynthia and Peter were introduced three years ago by a mutual friend who thought they should know each other. When Cynthia saw Peter, she recognized his face from somewhere. It turns out that the two had been seated together on a flight 20 years ago. They chatted the whole time they were in the air, but left it at that.

“He didn’t ask me for my number and I didn’t volunteer it, so I never saw him again,” Cynthia told ESSENCE.com.

The Second Time Around:
Cynthia’s second meeting with Peter occurred when she flew from New York, where she was living, to Atlanta for a girlfriend’s birthday party. Her girlfriend was very busy that week and Peter — who was throwing the party — “kept being available,” Cynthia said. So the two had lunches together and got to know each other. By the time she flew back to New York she was smitten. Shortly after that, she had packed her and her daughter Noelle’s bags and boarded a plane to Atlanta for good.

“Most of my relationships move pretty quickly,” she revealed. “I’m an all-or-nothing kind of girl.”

She Said It First:
Moving pretty quickly, Cynthia revealed that she said “I love you” after just three weeks of knowing Peter. “I said it first actually, which I wasn’t happy about,” she admits, “I came back to Atlanta and we went out on a real date. He picked me up from the airport and we went and ate and I think the next day we were hanging out and I just said, ‘I know you’re going to think I’m crazy, but I think I love you.’ Peter said, ‘That’s it. She’s crazy. Let’s get you to the plane.’ But he was kidding. Then he said, ‘I love you, too.'”

For All to See:
Most celebs keep their engagements and nuptials private, but Cynthia and Peter thought, since the cameras were going to be involved in the rest of their lives, they might as well let them in on the proposal. “Once I moved to Atlanta, we got a home together so things kind of moved really quickly. At that point, I just knew I wanted to marry Peter and he just knew he wanted to marry me. I figured he was going to do it when he wanted to do it so we just ended up saying, ‘Well, why don’t we put it in the show?'” We’re glad they did. Cynthia’s shocked expression when Peter got down on bended knee in Episode 7 of Season 3 was priceless.

Runaway Bride:
Cynthia doesn’t hide the fact that she’s turned down a few suitors in the past — but when the time came for her to marry Peter, she chose to say, “I do.”

“When I was living in New York, everything was fast and crazy. I think I was moving around too fast to entertain getting married to anybody,” she says. “Once I came to Atlanta and things slowed down for me and I could just be still, I felt like it was the right time.”

Can’t Buy You Love:
Another thing Cynthia and Peter didn’t hide on “RHoA” was their money troubles. With the restaurant closing, the bride and groom had to scramble to make sure they could even afford their wedding. Here, she explains their current financial situation and tells us how their money woes have made them stronger:

“We’re in a much better situation now, but we’re definitely just building. Things are definitely looking up and I think we’re going to be fine. The thing about going through something like that, especially on television is we can go through anything together. Things are just always easier when you have money.

“This made us very appreciative and humble. There are way more people who are way more unfortunate. It made me appreciative of what I do have and gave me strength to keep going. I got so many emails saying, ‘Thanks for letting us go through it with you.’ That was definitely a choice because I didn’t have the energy to act like it was anything different.”

Cynthia and Peter tied the knot in a glamorous Atlanta affair with all the other ‘Housewives’ there. Share their love.