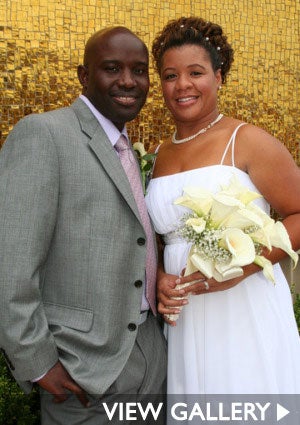 Welcome back to our weekly wedding feature, Bridal Bliss. Meet Natasha and Kevin, two thirty-somethings who met each other on the freeway of love (literally)! View photos from their wedding album and learn how they cut costs for their big day.

Freeway of Love: A sunny Sunday afternoon in June 2004 on New York’s Southern State Parkway held the answer to Natasha Green’s questions about love and romance. The cynical thirty-something educator had no idea she would meet the man of her dreams while jamming to her new Carl Thomas CD in her car but that is exactly what happened. “It usually took me so long to settle into a relationship that I thought I would never find the right guy for me,” admits the Queens, New York native. “Our [first] meeting started with an innocent conversation; we were literally wedged in gridlock traffic,” says Kevin who is a Jamaican transplant. After conversing on the telephone, the two discovered that they lived just a stone’s throw away from each other and a sweet courtship took soon after.

Never Knew Love Like This: Once Natasha and Kevin began dating, the pair quickly
became an integral part of each other’s lives. Kevin started to carve time out of his Sunday afternoons for dinner in Queens at Natasha’s mother’s house. And Natasha joined Kevin for excursions to Florida to visit Kevin’s family. One evening in January 2008, Kevin prepared his sweetie’s favorite pineapple chicken dinner and treated her to a bouquet of cherished flowers: lilies and orchids. “He asked me to point out the difference between the orchids and lilies. I noticed the ring was hidden in the flowers. Once I stopped crying, I saw Kevin was kneeling on one knee next to me, ready to propose,” recalls Natasha. “I totally wasn’t expecting it because I was just complaining to him about doing all the housework,” remembers Natasha with a laugh.

Cultural Identity: While the couple hit it off immediately, they have (and occasionally still experience) differences in their cultures that cause them both to pause. Natasha is American-born while Kevin was born in Jamaica. “I’m still adapting to a lot of his customs and sometimes cannot understand the dialect of his family or friends,” shares Natasha. Thankfully, the duo didn’t allow this to stand in the way of their love and the chance at a lifetime of happiness.

Simple & Sweet: Many women already have their wedding dress, their bridesmaid dresses, their ceremony and reception venues selected before they even get a proposal. However, Natasha wanted her big day to be as low-key and hassle-free as humanly possible. The couple decided to have both their wedding and reception at a local restaurant based on the referral of one of Natasha’s coworkers. “I wasn’t even going to have a ceremony at all but we decided to do something small for our mothers,” explains Natasha. There were no bridal party, no huge floral arrangements or most of the other bells and whistles of a typical bridal affair for two young professionals but the couple had more than enough love and laughter for a lifetime of happiness.

Budget Bridal Bite: Natasha and Kevin are living proof that it is not necessary to blow the bank in order to celebrate your nuptials if you think outside the box. Why not consider serving brunch instead of lunch or dinner at your reception? Not only is it cost-effective; it allows you to introduce your loved ones to a chic and unique wedding experience. If you’re not getting married in a church, opt for a friend or family member to be your officiate instead of a pricey traditional one. “We save about $500 by having my friend marry us,” reveals Natasha. This is an obvious cost-cutter and it also allows someone special to take part in the experience rather than a stranger.

Would you like your wedding to be featured in Bridal Bliss on ESSENCE.com? Submit a 100-word synopsis of the nuptials along with ten pictures to realweddings@essence-online.com. Only weddings that have taken place in the last six months will be considered.