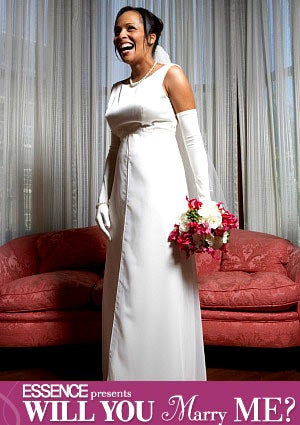 I am getting married in August 2010 to a man who is 11 years older than me. I am 45 years old, he is 56. We met through a mutual friend while he was in New York on business, he is a native New Yorker, living in Florida. I was not looking for a relationship of any kind. If anyone would’ve told me, ‘you will be getting married again,” I would have said “absolutely not.” After going through my divorce, which lasted four years, I felt like I’d let everyone down. I was married to a doctor and everyone thought I had a fabulous life. I had a nice car and a beautiful 7,000 square foot home on five acres in upstate New York. I built it and put every knob on every door. I used to call it my pretty prison because I wasn’t happy. People said well how could you leave a doctor? I’d say, “Honey, those Benjamins do not keep you warm at night.” I wanted my husband. I didn’t want his wallet. My deciding factor to leave was back in 2006, I got diagnosed with multiple sclerosis. I was in a wheel chair; I couldn’t write my name. I couldn’t see out of my right eye. I wasn’t even strong enough to stand. My husband said, “I don’t have time for this. You have to find someone to come in and take care of these kids.” I was relapsing all the time and my doctor said, “Whatever is going on in your life that’s stressing you out, you have to stop. It will kill you.” So I had to start the divorce proceedings. I felt like I wasn’t going to make it if I stayed with him and I didn’t want to leave my kids. Now I am on a new medication for my MS and I am feeling 100 percent, because I don’t have that stress. My fiance, Tommy, came into my life as nothing but a friend. I was fully single by 2007. I chose to take a break from dating at the time. I was not looking for a relationship of any kind. I would talk to him about his experiences. We talked for months on the phone. And those conversations got longer and longer until one conversation lasted for six hours and I didn’t realize it and I said, “oh my God! How long have we been on the phone?” He said, “well, that must mean something…” Later he took my daughter and me to Disney and while we were there he said, “well, what about us?” And he kissed me and that kiss sealed it. I thought to myself, “I know I’m in love because I have never felt like this.” It was like I was awakened. Tommy is 11 years my senior. I was really reluctant at first because my step-father was 17 years older than my mother. She always said, “don’t ever marry an older man because you’re going to have different interests and you’re going to grow apart. But, my mother had me when she was 34 and my older brothers are 10 and 12 years older than me so I feel like I grew up in an era that was a little older than my friends my own age. I was also concerned because I thought that with him being older, he wouldn’t be as active as he is. I was so used to being married to somebody who was mentally old in all aspects. Before, I was the aggressor in sex. Well, let me tell you, that is not a factor with my fiance. Which is amazing to me. I literally have to come home and rest after flying out to see him. He lives in Florida and I am still in New York. He flies me out at least once a month and he flies my kids out all the time. The age difference has not been a factor because he’s so young. He loves to play basketball, he loves to take walks with me. We go to plays and concerts and do all kinds of things together. The only thing is that his kids are in their 30s and they don’t know how old I am. I look like I’m in my 30s and they think I’m their age. While you can definitely see that I’m younger than him and he’s proud of it, that’s not why we’re together. His son thought I was marrying his father for a sugar daddy. I’ve always had my own money. So, I never wanted the money. I wanted the partner. And now I’ve found him. My kids and I are moving down to Florida. I’m also keeping my house in New York. There are going to be some big changes and I’ve done everything I can to try to get my children prepared for them, but I finally have a stable man in my life. He’s not perfect. He’s not my savior. He’s a man. But he is a good guy. I say, “you don’t choose who you love.”