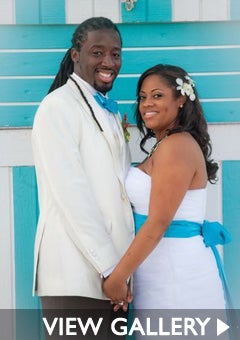 Bride: Lisa Joseph, 35 Groom: Bobby Metelus, 33 Occupations: Lisa — Sports Business Executive for CAA Sports; Bobby — Account Executive for Clear Channel Hometown: Miami, Florida Wedding Location: Palm Hotel, Miami Beach, Florida Wedding Date: April 9, 2011 The Way to a Man’s Heart: Lisa was the Development Director at former NBA star Alonzo Mourning’s youth center in Miami, where Bobby happened to be a volunteer, teaching teenagers computer skills four days a week. Since their respective duties never called for any interaction, Lisa had no idea that she caught Bobby’s eye. When it came time for the staff Thanksgiving potluck, Bobby had his chance to make a move.  According to Bobby, Lisa’s collard greens blew him away and made for an easy opener. “That was the first thing that made me have the courage to talk to her,” he reveals. It Just Clicked After that first conversation, Lisa and Bobby became fast friends, keeping things platonic until one March 2008 day when the two decided to go for cocktails with a group of work friends after work. “We hung out and found out that we had some chemistry between us and we’ve been together ever since,” Lisa shares. “We knew early on that we really liked each other so we started hanging out every single day from that night on.” Preparation Mode: Before meeting Bobby, Lisa had not been in a serious relationship for some time. She wondered when it would be her turn to fall in love again. “I really prayed about it,” she says. “I remember one night, I was in tears, like, ‘Okay, God, when is it going to happen?’ In my spirit I felt God speaking to me saying, ‘I’m preparing you and I’m preparing him.’ …Then maybe two weeks into dating Bobby I said, ‘Okay, God. This is him. I know it is.'” Telephone Love Five months after they began dating, Lisa was in Chicago on business and called Bobby to say goodnight. “He said, ‘Goodnight. I lo…'” Lisa recalls. “I said, ‘Excuse me?’ Then he ended up saying, ‘I love you,’ on the phone that night.” Up in the Air: Bobby and Lisa planned a romantic getaway for Lisa’s birthday in December 2010. That morning as the two got comfortable in their first class seats, Lisa hoped to take a long nap until they reached their destination, but Bobby had a different plan. When the captain turned off the seatbelt sign, Bobby got up to put his plan in motion. Just then, Lisa dozed off. When she woke up, just a few minutes later, she heard a flight attendant on the loud speaker say, “We have a special surprise for the couple in 1E and  1F.” Still waking from her nap, Lisa looked over to see Bobby on bended knee, pulling a ring box out of his pocket. “We’re at the highest point we can possible be, at 30 thousand feet in the air,” he told her. “Now It’s time to take our relationship to the highest level it can go. Will you marry me?” Lisa was speechless for quite some time, until the flight attendant said, “Everyone’s waiting for an answer.” “I said yes! I started crying, the entire plane was clapping, they brought out champagne,” Lisa remembers. “It was the best day of my life.” Take a look at Lisa and Bobby’s touching wedding trailer by Fandango Wedding Films. Lisa and Bobby tied the knot in a colorful beachfront celebration. Share their love…