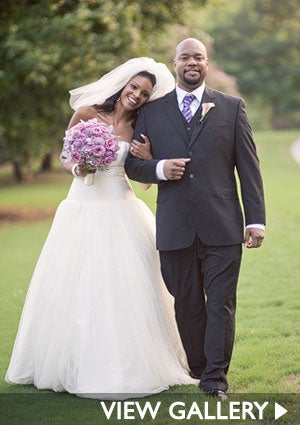 It’s a Set-Up
When her good friend told her she knew the perfect guy for her, LaTonya was skeptical. But as soon as she met Jason, all of her resistance melted away.

“I kept saying, ‘I don’t want to be set up,'” LaTonya says. “Then when I went out and met him we instantly clicked.”

“From then on, I pretty much knew that I really liked him,” LaTonya giggles. “He took me back to where I was living at the end of the night and we had our first kiss. I was happy. It was a good kiss.”

He Said, She Said
“I found him attractive right away. He seemed really even-keeled, he was smart, but he wasn’t a nerd and we just got along really well,” LaTonya says of her first impressions of Jason. “It was definitely really intense at first.”

“She was beautiful,” Jason states of what he first thought of LaTonya. “She was unlike any other girl I had dated. She wasn’t focused on a lot of the things that the young ladies I had met until that point were. She wasn’t even focused on marriage.”

“I think I knew I loved him from the very beginning,” LaTonya says sweetly, “but I wanted to go and be a reporter.”

Let’s Stay Together
LaTonya did become a reporter, picking up a position in Atlanta, where she is originally from, that would send her and Jason into a long-distance relationship. It was difficult at first, but they worked it out, LaTonya says.

“We had a couple of issues here and there, but eventually we decided to stay together.”

LaTonya moved on to work in Kentucky and Indiana and Jason would take trips to see his lady as often as he could.

Homecoming
When her contract at the TV station in Indiana was ending, LaTonya and Jason had “the talk.”

“I said, ‘either we’re going to get serious or I’m going to look for a job in another city,'” LaTonya explains. “That’s when we decided, let’s get married.”

Still Surprised
“Once you get older, the surprise isn’t that important anymore,” LaTonya says. “We had been together for so long we went to pick out rings together.”

They found their ring at Tiffany on a Monday afternoon in July 2009 and agreed that they would return to pick it up that Friday. Little did LaTonya know, she would get the surprise she never knew she wanted.

On Thursday evening, Jason took LaTonya to their favorite tapas restaurant in Downtown D.C. called Zaytinya. They sat at a secluded table, outside relaxing and enjoying each other’s company.

“All of a sudden he got down on his knee,” LaTonya remembers, “And he just asked if I would spend the rest of my life with him.”

The answer was always, “Yes.”

After 11 years of dating, including years of long-distance, LaTonya and Jason tied the knot in a breathtaking garden wedding. Share their love.