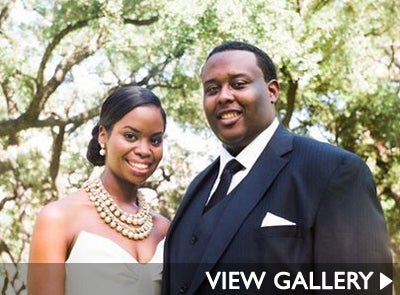 Slow and Steady
“It was kind of a long process,” Kourtney giggles about how she and Tim became friends and eventually partners.

The two met in December 2006 as volunteers at a clothing drive for Houston Area Urban League Young Professionals group. They were sitting with a group of other volunteers chatting about everything from current events to popular culture, and Tim kept making Kourtney laugh.

“I remember thinking, ‘Oh that was a nice guy,'” Kourtney reveals. “But it wasn’t like a whole connection at that point.”

The Friend Zone
Fate would have it that two months later, while at a Bible study, Kourtney and Tim would meet again. Their friendship grew, as they would see each other every week for about six months and eventually they tried to date. Kourtney wasn’t ready.

“We went on a couple of dates from August to October and then I told him I was interested in just being friends. I wasn’t quite ready to settle down,” Kourtney tells us.

“She was shorting me,” Tim says. “I had to convince her to go all in. She was trying to nibble and I was like, ‘You have to dive in.'”

It wasn’t until July of the following year that Tim and Kourtney got out of “the friend zone.”

“July was when I dove in and we officially became official.”

Tim was invited to an NAACP gala and he invited Kourtney as his date. After the event, as he walked her home, he stopped and said, “I’m putting all my chips on the table, Kourtney. Let’s do this. Let’s dive in. I want it all.”

It was make or break for Tim. Three days later, the two had lunch together and as they left the restaurant Kourtney looked at Tim and said, “Okay. This is it. We’re together now.”

“I was so happy,” Tim remembers.

Make a Plan
“Pretty soon after we got into the relationship I thought, ‘Oh wow. I think I’m going to marry this person,” Tim says.

Having been friends for a long time they knew each other well and had already built a foundation.

“So, we put together a project plan for our engagement,” Tim explains. “We created a timeline with milestones and different things that had to be done before we got engaged — our families needed to integrate on a certain level, spiritually we needed to be aligned on a certain level — and we put together a plan of action. We finished the plan in September 2009 and then I proposed in November.”

The Tropics
Tim booked a trip to Puerto Rico for their engagement. Since they had already completed the plan, Kourtney knew what was coming.

“The engagement wasn’t a shock,” she says. “The surprise was the trip to Puerto Rico. I had pretty much known we were getting married since we started dating.”

Still, the couple enjoyed their weekend in Puerto Rico, traveling to the rainforest and exploring the cobblestone streets of Old San Juan. On their last night on the island, Tim took Kourtney down to the pool area of their hotel, got down on bended knee and asked for her hand. He already knew the answer was “Yes.”

Knowing that together they can accomplish anything they set their hearts to, the two soulmates started their future off right with a classy celebration full of joy and revelry. Share their love…