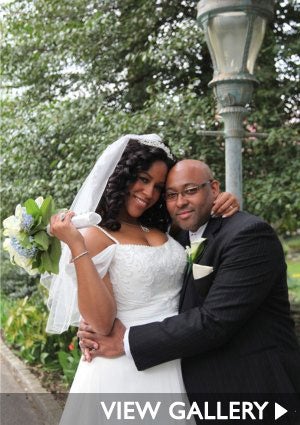 Bride: Kimberly Cooper Groom: Rodney King Occupations: Cooper — Founder, Writer and Brand Strategist of BG Unlimited, Inc.; King — Consultant and Senior Network Administrator for BET Hometown: Riverdale, NY   Wedding Location: Westbury Manor, Long Island, NY Wedding Date: April 15, 2010 Crossing Paths Kimberly Cooper had just gotten over heartbreak when she bumped into her former co-worker Rodney King on the corner of 57th Street and Ninth Avenue on a bright summer day in New York City. Back when these two worked at Elektra Records, their exchanges had always been polite and when they both wound up at BET, their cordial “Hey. How are you doing?”-style relationship continued. But on this particular day, they saw more in each other. Their “Hey, How are you doing?” turned into a 90-minute conversation and plans for a first date. “The sun was hitting her and she had this glow,” Rodney remembers. “The conversation went from five minutes to over an hour to me asking, ‘Are you seeing anyone?’ Everything just happened naturally. Nothing was forced.” Getting Cheeky For their first date Kim and Rod, as they refer to each other, went to the movies to watch “Get Smart.” After the flick, they still wanted to spend time with each other so they grabbed a bite at an Italian restaurant on Ninth Ave. Still unable to separate from each other, the budding couple shared a few drinks and laughs at nearby Zanzibar. Taken by his date’s cuteness, Rodney leaned over and kissed Kim on the cheek. She was taken by surprise. “It was the best date,” Kimberly says. “We were sitting there laughing and he said, ‘I think you’re really cool,’ and then he just leaned over and kissed me on my cheek. I thought it was the cutest thing. I consider that kiss on my cheek the proper first kiss.” “I just thought, ‘Wow, look at this beautiful woman,’ and I just kissed her on the side of her face. I saw a smile on her and thought, ‘OK, that one lit her up!” I Got You “I had gotten my heart broken nine months before I started dating Rod,” Kim explains. “That heartbreak damaged me in a very real way and I was afraid to let him know about that. One day we were in his apartment and he was cooking and I was sitting on his couch, and out of the blue he asked me, ‘Have you ever suffered from depression?’ I don’t even know what came over me but I told him everything. I said, “sometimes the world gets really dark for me,” and he said, ‘You never have to worry again because I’ll never let you fall and if you do fall, I’ll be there to catch you.'”   Foreshadowing In November 2008, months after they began their romance, Kimberly and Rodney popped into a jewelry store to try on some rings for fun. While in there, Rod slipped a wedding band on his left had and remarked, “I really like this.” Kimberly took notice. When her sweetheart walked away from the counter she bought the ring. “I was really walking on faith with that one,” Kim jokes now. “I was thinking, ‘Man, if he doesn’t step up, I’m gonna be stuck.’ I don’t know what was going on with me. I never get impulses like that.” Brighten Up the Day Kimberly didn’t tell anyone that she’d bought the ring for Rodney. Keeping close to her for months. One April morning the two lovers were spending time together. Kimberly somberly stared out of her bedroom window, lamenting the rainy day and all the woes of the world. Rodney knew just what to do to turn his lady’s smile upside down. “I was crying and he was like, ‘Babe, everything is going to be fine.’ I looked up at him and he had the ring box open. I said, ‘What’s that?’ He said ‘It’s a ring!’ I sad, ‘What do you mean it’s a ring?’ He said, ‘I want you to marry me. Will you marry me?’ I was like, ‘Of course I’ll marry you, but I told you not to propose to me until I have my nails and my hair done,” Kimberly laughs. After she accepted Rodney’s proposal, Kimberly surprised him with the news that she had bought his wedding band five months earlier. “She’s full of surprises,” Rodney sighs. “She never ceases to amaze me.” View Kimberly Cooper and Rodney King’s wedding story.
Loading the player...