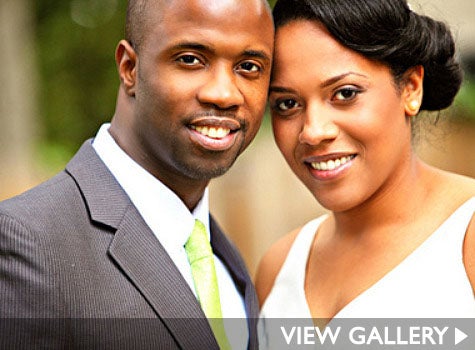 School Daze In September 1999 Joanne Canady began her first semester at Rutgers University in Camden, New Jersey. She picked up a part-time job at The Office, a copy center office supply store in Hoboken, New Jersey. The Office just so happened to be close to Stevens Institute of Technology in Hoboken, NJ. When Matthew Brown, a senior at Stevens started working with her. She was delighted. “He had this phenomenal personality,” Joanne remembers. “I thought, ‘Oh my gosh! This guy is great!” The two dated casually that semester, but decided it just wasn’t a good time for them to be together. Joanne was just starting college and Matt was moving on to his first post-grad job at Lockheed Martin in Southern New Jersey. The two parted ways. Boomerang Six years after they broke up, Joanne sat at her computer frantically searching her e-mail for an important e-mail address. She typed in the letter M and got a blast from the past when Matthew Brown’s name popped up. “I wonder if…” she thought. “Nah. He can’t still have the same e-mail address.” Joanne tried her luck and wrote him a simple, “Hey, how are you?” style letter. “My heart started racing. I was at work. Sitting in a conference room. I had just finished a meeting with 20-odd people and I saw the e-mail come in and I said, ‘No way. It can’t be.’ The e-mail was much needed at the time. I responded right away and within a week we had set up a time to meet.” Second Time Around When the time came for Joanne to go out with Matt again, she made sure she looked really good, slipping on a little black dress and red, high heels. “I waked out of my room all dressed up and told my sister and my roommmate, ‘Ladies. I am going on a date with the man I’m going to marry.’ They were like, ‘What?!’ I said, ‘Watch and see. I let him go once. I’m not doing it again.'” By the end of their date, both Joanne and Matt knew they could pick up right where they’d left off six years earlier. Whaddaya Say? Joanne and Matt dated for a year and a half before he asked her to move in to his South New Jersey home. Months later, Valentine’s Day was approaching. Matt asked Joanne what kind of flowers she liked. She said, “Do not get me flowers on Valentine’s Day. They’re too over-priced and that goes against my principles.” Not listening, Matt had flowers sent to his girlfriend’s office anyway. Too bad the florist delivered the wrong bouquet to Joanne. That must have been a foreshadowing of how things would go that day. On her way home, Joanne ordered a pizza to bring home to eat with Matt. She set the box on the counter and opened it only to find the wrong order. The two laughed out loud at the day they’d had and settled in for some prime-time TV, but Matt wasn’t letting it go so easily. “He kept saying, ‘What’s going on? Nothing is working. Nothing is going the way I want it,” Joanne remembers. “I was being cheesy and said, ‘It doesn’t matter if the pizza’s wrong. It doesn’t matter if the flowers are wrong. As long as we have each other, everything’s fine.'” “Do you mean it,” Matt asked. “Of course I mean it,” Joanne smiled. The next thing Joanne knew, Matt had a ring box in his hand. She looked at him, speechless. “Do you wanna?” he asked. “Yeah. I wanna,” she replied. “It was very romantic to me,” Joanne muses. “because it was very him.” Joanne and Matt tied the knot on September 26, 2009 in a beautiful garden wedding that was very “them.” Share their love.