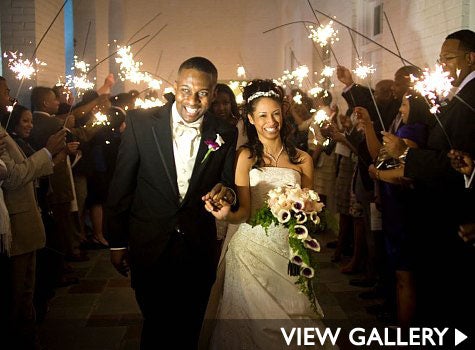 Bride: Jennifer Holiday Groom: Vince Hudson Hometown: Baltimore, Maryland Occupations: Jennifer — African-American Marketing & Capability Manager for Procter & Gamble; Vince — General Manager of North America Cosmetics Business for Proctor & Gamble Wedding Location: Ceremony — Lawless Memorial Chapel, Dillard University; Reception — Gallier Hall, New Orleans, Louisiana Wedding Date: March 13, 2010 Must Be Fate: Vince Hudson first spotted his bride to be, Jennifer Holiday, sitting alone on the staircase of a hotel lobby in New Orleans. The city was energized by the ESSENCE Music Festival and something told Vince to walk up to Jennifer and introduce himself. “I thought, wow!” Vince remembers. “Sitting alone at an event on the stairs — this must be destiny. I walked over and I said, ‘Can I join you?’ and she let me.” “He had the right approach,” Jennifer says approvingly. “It was very refreshing. It was a pleasant surprise.” Love’s Intentions For their first date, Vince took Jennifer to Olivier’s Creole Restaurant — now a favorite of the couple. “We shut the place down,” Vince says. Over the ESSENCE Music Festival weekend the two introduced their friends to each other and tried to spend as much time together as possible. At the end of it all Jennifer asked Vince a simple question — “What are your intentions?” to which he replied, “I intend to get to know you better.” Then Vince called his best friend Warren and said, “I think I met my wife.” If It Takes a Lifetime And get to know each other, they did. Jennifer lived in Florida and Vince in Ohio, but that didn’t stop these two from sending e-mails and chatting on the phone often. Soon they were in love and ready to take things more seriously, or so they thought. Jennifer moved to Cincinnati to be with Vince. “I knew he was a great guy, but it was definitely more overwhelming for me than for him,” Jennifer explains. “It was my first real relationship post-college.” “We realized very abruptly that we had moved too fast,” Vince says. “So we decided to take a break and we took a four-year break.” Knew It All Along After taking some time for personal growth, the two always kept in touch. Then, fate had it that both Jennifer and Vince would share center stage at an awards show where the two received an award. “Everyone was like, ‘wait a minute, why aren’t you guys together,'” Jennifer remembers. After much consideration, Vince and Jennifer decided that the time was right for them to be in love. “I knew that we stayed connected for a reason,” Jennifer gushes. “All the things I already knew before became more true,” Vince says of starting over with Jennifer. Festival Time Again After years of dating and being friends, Vince and Jennifer knew their love was for real. Vince decided to take the love of his life back to where their journey began. He proposed during the 2009 ESSENCE Music Festival, while at dinner at Olivier’s. “I made a logo that read ‘VH and J’ that flashed on the wall,” Vince relays. “Then I got on one knee and I popped the question.” “He didn’t even finish the question,” Jennifer jumps in. “I said yes before he finished his sentence.” “The rest of the weekend was a big celebration of the engagement,” Vince adds. Back to the Big Easy On March 13, 2010. Vincent and Jennifer headed back to New Orleans to tie the knot at the city’s Dillard University. Their love forever tied to the Bayou, they couldn’t think of a better place to say “I Do.” “We felt it was the right place to get married,” Jennifer says. Share their love…