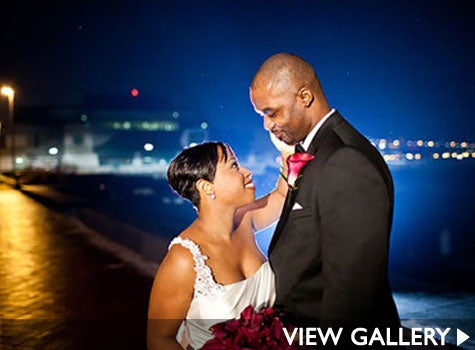 Light Up My Life
When Charles accompanied his cousin and his wife to Isis’ 30th birthday party, no one told him to wear cocktail attire. The only person wearing jeans in a sea of stylish slacks, Charles felt under-dressed and a little out of place. And despite her party crasher violating the dress code, Isis welcomed him with her warm smile. Charles was hooked from “hello.”

“She was so friendly, she was so attentive, she would come by every ten minutes and see how I was doing,” Charles remembers. “I just kept asking my cousin, ‘Is she seeing anyone?'”

Although they didn’t have a lot of time for long, get-to-know-you conversations that night, Charles was smitten with Isis by the end of the evening. As everyone said goodnight and got in their cars to head home, his cousin called Isis over to talk to Charlie one more time. She cutely told him that he could get her number from his cousin. He called her the very next day.

“The next day was my actual birthday and he called,” Isis recalls. “He’s been calling me ever since.”

“We’ve been in contact every day since we met,” Charles adds.

Crossing the Border
When they were dating, Isis lived in Southern New Jersey and Charles lived in Philadelphia — about 25 minutes apart. After hanging out a few times and talking constantly, Charles was ready to take their courtship a little further. Knowing that Isis had stopped into a Barnes and Noble bookstore to quickly grab a resource book, Charles drove to New Jersey from Philly to see her for five minutes.

“I thought it was so sweet that he would drive 25 minutes, just to spend five minutes with me,” Isis says.

There in the parking lot of Barnes and Noble Booksellers, the two sweethearts exchanged the first of many kisses to come.

Happy New Year
Charles confesses that he knew he loved Isis after three weeks of dating her. Three months into their relationship, in March 2009, he was already shopping for engagement rings. He bought the band that month and put it away for safekeeping.

Nine months later, on New Year’s Eve, he was ready to pop the question. After seeing an advertisement of a couple getting engaged under a Christmas tree, Charles knew how he would ask Isis to marry him.

“I went to her house and her mom, her grandmother and her sister were all there,” he says. “New Year’s Day came, we watched the ball drop, we toasted and then I took Isis by the hand. When she finally looked at me I was down on one knee and she just cried.”

The couple’s engagement was videotaped on Charles’ new Flip camera that Isis bought him for Christmas.

“The thing that made the proposal perfect was that it was at the house with my family,” Isis says. “In the video you can hear my grandmother talking. You can see me hyperventilating. My mom is running around looking at the ring. It’s a romantic comedy and it’s just so funny to watch.”

Isis and Charles got hitched one year later on December 31, 2010 in a celebration that carried over to the New Year and into eternity. Share their love.