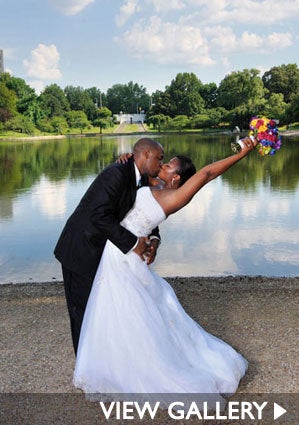 Great Catch:
While in D.C. for President Obama’s Inauguration in February 2009, Gwen passed by a Hudson News store and noticed the cover of “Newsweek Magazine.” It was all about how free online dating site PlentyofFish.com was making the competition steep for paid sites like Match.com and EHarmony.com.

“The magazine intrigued me on two levels,” Gwen tells us. “I am a digital marketing executive and I also authored a dating, relationship and self-love book called, ‘If It Walks Like a Duck… and Other Truths My Mother Taught Me.’ I was more interested in seeing how this site operated and what made it so interesting.”

When Gwen got back to Cleveland, where she lived at the time, she created an account with Plenty of Fish, never knowing that she would meet her future husband on the site. When she stumbled upon Endion’s page she was impressed.

“He’s the only guy I saw who had a well-written profile,” Gwen remembers. “He had on a business suit in his picture, while everyone else had on jeans.”

Gwen made the first move, sending an e-mail to introduce herself. Endion was blown away.

“I thought that she was completely out of my league,” Endion says about receiving Gwen’s e-mail.

Talk Up A Storm:
“Once we got to talking I felt very comfortable,” Endion says of his two-and-a-half-month long phone and internet courtship with Gwen.

The lovebirds couldn’t get enough of each other, sending multiple messages through the dating site every day, chatting on instant messenger and staying on the telephone all night.

“Every day until we met in person we would talk for no less than seven hours a day,” Gwen shares. “We were like teenagers, but we were both in our mid to late twenties. We’d even fall asleep on the phone.

Kiss Me, You Fool:
After meeting up for a fishing trip the week before, Endion and Gwen had their first official date at an Ethiopian restaurant in Cleveland. Gwen had planned to kiss Endion before the date started to remove any awkwardness. When he picked her up for their date, she showed him around her apartment. They both sat on her bed, anticipating when the kiss would come, when Gwen turned to Endion and asked, “Do you want to give me a kiss now?”

…and kiss they did.

Long Drive Home:
By October 24, 2009, Endion and Gwen had been in the love bubble for six months. Both were sure they had met their match and all that was left was for Endion to “put a ring on it.” They had already moved to Michigan, but that didn’t stop Endion from planning Gwen’s engagement surprise at the Ethionpian restaurant in Cleveland where they had their first date.

When Gwen arrived home from work, Endion told her to get dressed because he was taking her out to dinner. She obliged and the two set off. Somewhere along the 3-hour-long drive to Cleveland, Gwen realized she was in for a big surprise, but didn’t think much of it. Arriving at the restaurant she noticed roses on each table, wedding streamers and bells on the ceiling and was puzzled.

“I have a present for you,” Endion said. “Close your eyes.”

Gwen closed her eyes and Endion covered them with his palms. When he lifted his hands, Gwen looked up to see all of Endion’s family standing in the restaurant.

“Will you spend the rest of your life with me,” Endion asked.

Gwen replied with an enthusiastic, “Of course!”

“It was like something out of a movie,” Gwen gushes. “The whole restaurant clapped and then his family sat down and we all ate and just had a really great time.”

On July 11, 2010, Gwen and Endion tied the knot in an enchanting garden ceremony in Cleveland, Ohio. Share their love.