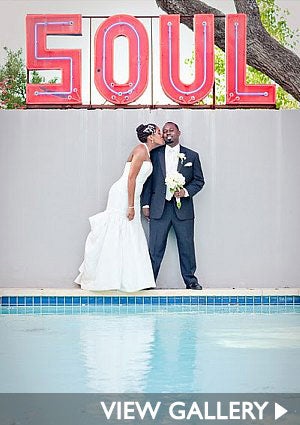 Bride: Genesis Draper, 29 Groom: Brandon Leonard, 31 Occupations: Genesis — Assistant Public Defender; Brandon — Assistant District Attorney Hometown: Houston, Texas Wedding Location: Ceremony — Chapel Dulcinea, Austin, Texas; Reception — Trattoria Lisina at the Mandolo Estate Winery, Driftwood, Texas Wedding Date: March 28, 2010 BFFs: Genesis met Brandon at the University of Texas School of Law and it was “like” at first site. The two became inseparable. “We were best friends the whole time that we were there,” Genesis tells us. “We hung out all the time. We spent time with each other’s families. We even lived in the same apartment complex.” More than friends: It wasn’t until their last year of Law School that Genesis started feeling butterflies when she got around Brandon. “We were taking a trip to Houston to compete in a mock trial. Brandon and I rode there by ourselves together,” Genesis explains. “Brandon is from Houston so when we got there he took me all around. On that trip I was just like, ‘I think I’m in love with Brandon.’ After that I couldn’t get it out of my head.” Gotta Tell Somebody: In February 2006, Genesis and Brandon co-hosted a Super Bowl party. She had been keeping her feelings to herself since their trip to Houston. After the get-together, as the two of them were cleaning up, Genesis let her secret slip. “I just told him,” she says. “He just jumped right on board and we dated ever since. It was a pretty seamless transition.” Let’s Do This: After Law School, Genesis got a job in Nashville and Brandon got a job back home in Houston. The distance didn’t deter them. They saw each other once a month, talked on the phone all the time and took vacations together to Los Angeles, New Orleans and Puerto Vallarta, Mexico. After four years they decided it was time to close the gap between them. “I’m a huge ‘Sex and the City’ fan,” Genesis says. “The way we decided to get married was very Carrie and Big. We were just like, ‘Let’s just get married.’ We didn’t even exchange rings until the actual ceremony.” For their wedding, Genesis and Brandon headed back to Austin (where they first met) and tied the knot in a gorgeous open-air chapel on the outskirts of the city. Share their love.