Lovebirds Gabrielle Union and Dwyane Wade are tying the knot this summer and it’s going to be hot, hot, hot – literally!

They’re making it official on August 30th in Miami. TMZ.com released photos of the couple’s save-the-date invitations, which went out to invited guests this week. Wade’s kids made a guest appearance on the invite holding a sign that reads, “Nickie, will you marry us?” Union’s nickname is Nickie because her middle name is Monique.

No news yet on who the soon-to-be mister and misses will have by their side at the altar, or how much they plan to spend on the big day, but judging from these super sweet save-the-dates, they’re putting TLC into every detail. 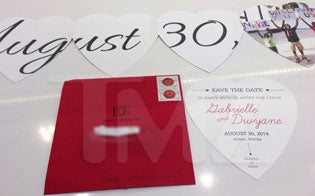