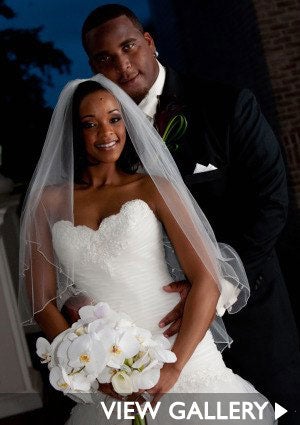 Bride: Tia Watts, 32 Groom: Fred Robbins, 33 Occupations: Watts, Co-founder of Off the Market Events; Robbins, Defensive Tackle for St. Louis Rams, NFL Hometown: St. Louis, Missouri Wedding Location: San Destin Golf & Beach Resort, Destin, FL Wedding Date: May 23, 2009 Right Place at the Right Time: People always say, “Never date a man you meet at the club.” But that’s exactly where Tia Watts met her husband, NFL player Fred Robbins, who was playing for the Minnesota Vikings at the time. At 24, Tia had just moved back to Minneapolis and was accompanying a girlfriend who had plans with one of Fred’s teammates. At the party, Tia and Fred were both starting to feel like the third wheel. That’s when he called her over and two started to chat.   “We were like two friends right away,” Tia remembers. “I thought he was very attractive. He has these pretty eyes that change color depending on the season. He was just a genuine, nice guy.” “I thought Tia was very attractive of course,” Fred chimes in. “But the thing that struck out the most was the conversation. It was real and genuine. We never had a dull moment.” Tests of Time: In nine years, Tia and Fred have been through their share of relationship challenges, from learning how to interact with each other, to living in different cities to sharing a home for the first time. The newlyweds recently switched cities again, when Fred joined the St. Louis Rams. Tia says, “We’ve been through it all, That’s why we have a lot of friends who come to us for relationship advice.” What are this long-lasting couple’s tips for love? London Calling Fred took Tia with him to London where his [then] team, the New York Giants, was playing against the Miami Dolphins. He got the idea to pop the question while across the pond from his best friend. The Giants won the game and the whole team went out to celebrate. Knowing that Tia would be completely clueless, Fred popped the question at the after party. “We were having fun and I just popped it on her. She looked stunned,” Fred laughs. “She had no clue. She shed a little tear and it made me happy. We enjoyed that night.” “I just kept asking him, ‘are you serious?'” Tia remembers. “”He just asked from his heart. We were dancing one minute and the next he was like, ‘Will you marry me?'” Wedding Inspirations Since getting engaged to and marrying Fred, Tia’s begun using her PR skills to plan couples-only events aimed at honoring and enhancing relationships through her company “Off The Market Events.” “It came from me figuring out what it means to be a wife. It’s about changing your lifestyle,” Tia says. “You can’t do what you did when you were single. I really want to make relationships the new ‘black.'” Everything Counts After their long and happy courtship, Fred and Tia really wanted to celebrate their union in a big way. The two spared little expense when it came to adding special touches like cigar rolling and candy making stations. Share their special day.