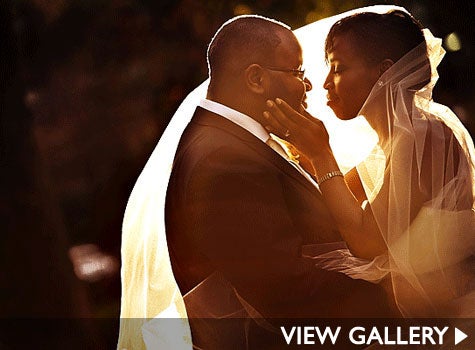 See You Next Lifetime
Faisha and Leonard had known of each other back when they were high school students in Pennsylvania. It had been years since their last encounter when they bumped into each other in 2001 at a fundraiser at Philadelphia’s Loews Hotel.

“Her eyes were what grabbed me,” Leonard confesses.

The two were fresh out of college and more interested in networking than falling in love. They exchanged business cards and became fast friends.

“We remained platonic friends for seven years,” Faisha explains. “Then there was a time when both of us were single and phone calls happened more frequently — he started to court me. It was a pleasant surprise.”

The Courtship
“I always saw Leonard as a very kind and thoughtful person, but when we started to date, I saw a different side of him,” the new wife muses.

For their first date, Leonard took Faisha to a fundraiser for one of his clients. The event featured a private concert at Philadelphia’s Kimmel Center. As if that weren’t exclusive enough, he then whisked her off to a local lounge to hear a few sets by Erykah Badu.

Think It Over
After dating for a while, Leonard wanted to put an official stamp on their relationship. He asked Faisha to be his girlfriend on Valentine’s Day 2008. She needed more time.

“I just wasn’t ready,” Faisha remembers. “I knew that he was serious and that he had really good intentions toward me. I wanted to make sure that I was mature and mentally ready for whatever direction the relationship went in.”

Leonard asked Faisha to be his lady one more time before leaving the decision up to her. On March 31, 2008, Faisha asked Leonard to be her guy.

Back to the Beginning
“I wanted to go to the place where we first reconnected after school,” Leonard says of popping the question.

On February 10, 2010 he took Faisha back to the Loewes Hotel where they had first run into each other as recent college grads, telling her that they were going to a friend’s birthday party.

“We got to the spot and she was standing in front of me with her back turned and I pulled back. By the time she turned around I was on bended knee,” Leonard tells us.

“I was surprised. It was almost like an out-of-body experience,” Faisha giggles. “I don’t remember anything he said, I just knew he was talking. I heard, ‘Blah, blah, blah be my wife.'”

The two enjoyed their special moment and then celebrated their new status with an intimate dinner with Faisha’s sister and best friend and their significant others.

On October 17, 2010, Faisha and Leonard said “I do” with a heartfelt celebration at the Westin Philadelphia. Share their love…