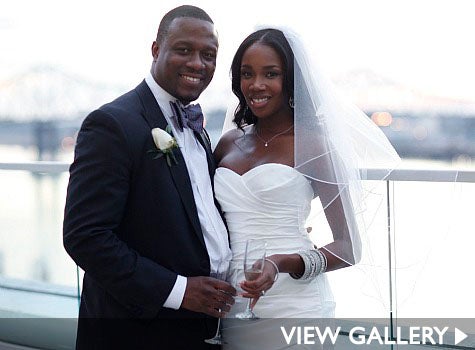 Occupations: both Celebrity DJs — KissTheDeejay — I am M.O.S.

Last Night a DJ Saved My Life:
In 2005, Kiss was working as a cocktail waitress at NYC hotspot PM. Unlike some of the other bottle servers, she was never afraid to check up on the DJ — making sure he had a drink and was ready to get the party started. Kiss started making her way over to the booth regularly when star DJ M.O.S. was on the turntables. She loved his sets and soon admitted to him that she wanted to learn how to spin.

“It was the music that brought us together,” Kiss says. “I thought he was a good-looking guy, but him as a DJ intrigued me so much more. I learned what a good DJ was from him. From there we just got to be very friendly and then romantic.”

Kiss the Deejay:
M.O.S. took Kiss under his wing, teaching her how to spin when they both had time off. One night he invited her out to a gig so she could get a sense of what it’s like to play in front of a crowd.

“The bar was next to the DJ booth and we had a couple drinks,” Kiss remembers, “and then we literally looked at each other and we had our first kiss.”

“We were full-on in a relationship within a couple weeks after that,” M.O.S. adds. “It was pretty seamless.”

No Ordinary Love:
Since that first smooch, Kiss and M.O.S. have never fallen out. They’re forever bonded by the music that they play together and it helps that they both understand the strains of working in nightlife.

“Music will always be a part of our lives moving forward,” M.O.S. says. “It’s just so amazing to have your wife be your partner and be someone who understands the trials and tribulations of being a DJ.”

“We’re both so loyal and trustworthy,” Kiss says. “I know he would never in a million years disrespect me and he knows that I would never disrespect him either.”

Let’s Get Married:
In March 2009, after four years of dating, Kiss was on a mission to get hitched.

“It was around the time that Beyonce’s ‘Single Ladies’ came out, so I was on a full-on campaign for him to put a ring on it,” Kiss confesses.

On March 23, 2009 Kiss was planning her birthday celebration. The couple’s house was hectic with preparations for the bash. Seeing that his lady was stressed out about the party, M.O.S. took her downstairs for some quiet time. Once they were alone, he got down on bended knee and popped the question.

“He picked the perfect ring,” Kiss tells us. “We didn’t shop for rings together or anything. I love the simplicity of the ring that he picked for me.”

The celebrity DJ couple tied the knot in a glamorous family affair in Kiss’ hometown of Baton Rouge, Louisiana. Share their love.