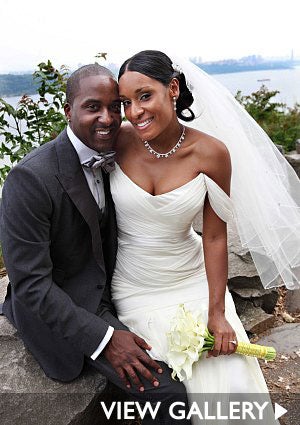 Bride: Dawn Baxter Groom: Derrin Woodhouse Occupations: Dawn: Music Manager, Entertainment Marketing Department, Nike, inc.; Derrin: Director of Consumer Marketing, Vevo Wedding Location: Ceremony: St. Paul’s Episcopal Church, Englewood, New Jersey; Reception: The Waterside Restaurant, North Bergen New Jersey Wedding Date: May 29, 2010 Not Love at First Sight: Dawn Baxter was introduced to Derrin Woodhouse through a mutual friend at a pre-season New York Jets game. The group had killer seats, but the Jets were losing. Dawn decided to make the best of her day and soak up the sun. This didn’t sit too well with Derrin. “She wasn’t into the game, which really got to me,” Derrin says. “I was like, ‘Why are you here, really?'” After the game, Dawn drove Derrin back to his place because they both lived in Harlem. When Derrin didn’t offer to pitch in for toll or tip. “I was pissed,” she said. Years go by: It wasn’t until a few years after their first meeting that Dawn and Derrin began to see each other in a different light. “It was during fashion week in fall 2003,” Derrin remembers. “She was all dressed up and she actually approached me, which took me aback. She asked me if I was going to any after parties. I was involved at the time, but her taking the first step to reach out impressed me.” “It wasn’t until 2004 that we started dating,” Dawn says. “we had a lot of the same interests in sports, music and travel. During July 4th weekend I took him up to my parents’ home in Martha’s Vineyard. It was our first weekend together. I knew I was falling for him because I got that cliched butterfly feeling and I just felt really relaxed around him. All of a sudden I was like, ‘Wow. I really love this guy.” Private Proposal: Dawn lived in her grandmother’s old apartment in Harlem. After dating for some time, Derrin moved in with her. Just after getting him settled, the couple started preparing for a vacation in Miami. One night as Dawn was checking the weather in the sunshine state, she saw Derrin drop to one knee. “Our relationship has grown so much,” he told her. “I just want to know if you’ll be my wife.” Of course, she accepted. Dawn and Derrin tied the knot in a traditional ceremony in St. Paul’s Episcopal Church in Englewood, New Jersey, followed by a lavish reception at the Waterside in North Bergen. Share their Love. All photos by Jose Reyes of Jose Reyes Photography
Loading the player...