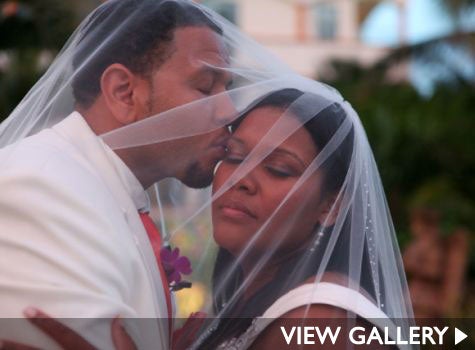 Bride: Danielle Williams, 29 Groom: Taymond Cunningham, 31 Hometown: Baltimore, Maryland Occupations: Danielle — Senior Auditor for Health Systems; Taymond — Long Shoreman at Port of Baltimore Wedding Location: Avetura Spa Palace, Riviera Maya, Mexico Wedding Date: June 25, 2010 Meant to Be “I have the perfect guy for you,” Danielle’s friend Dan told her in 1999. “He’s honest, he goes to church. He’s perfect.” Danielle was 18 then, and in a relationship. While she was receptive to her friend’s words, she wasn’t emotionally ready to meet the man of her dreams. Six years later, Danielle drove over to her friend Dan’s apartment. She was met by a tall, handsome man named Taymond, who arrived at the same time. As he waited for Dan, Taymond flattered Danielle and entertained her with small talk. Dan walked down the stairs and was ecstatic. “This is the guy I’ve been telling you about all these years,” he told Danielle. Taymond gave Danielle his phone number that evening and asked, “Would you mind getting to know me?” She already did. “He was already spoken of so highly, I felt very safe with him,” Danielle remembers of her first encounters with Taymond. The Magic Kingdom Taymond and Danielle shared four years of dating bliss. She had always wanted to go to Disney World during the holidays to hear the choirs sing and to see the park shine with Christmas lights. The lights wouldn’t be the only things shining on Christmas morning, 2009. Taymond took Danielle to the Magic Kingdom on Christmas Eve. That night, as fireworks flashed in the air, Taymond whispered to his lady, “I always wanted to give you fireworks. Here they are. This is the best day I’ve ever spent with you.” Before the clock struck midnight the two arrived at Cinderella’s famous castle. Taymond asked a photographer to take shots of him and his unsuspecting fiancee-to-be. At midnight, Taymond got down on bended knee. “I started shaking and crying,” Danielle says. “I couldn’t hear anything he said. I felt like Cinderella. It was amazing — a fairy tale proposal.” He said “She has one of the kindest hearts of anybody I’ve ever met,” Taymond said of his new wife. “She loves just as hard as I love.” She said “He’s my soulmate. He has a love for God like I have a love for God. I really fell in love with his faith and his heart,” Danielle gushes. Danielle and Taymond got hitched in a colorful destination wedding in Riviera Maya, Mexico. Share their love.