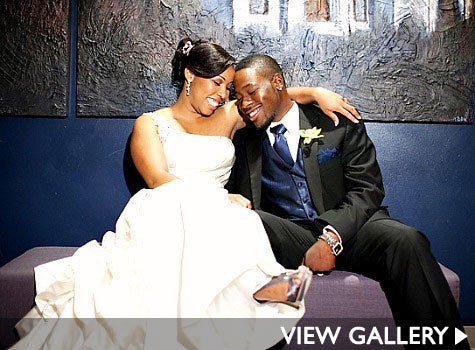 Easy Breezy Love
Danielle and Brandon are the college sweethearts that everyone wanted to be like — you know, the ones that made it. They met on the basketball courts of University of North Texas at the end of 2002. A year later, they were dating and they’ve been virtually drama-free ever since, growing from school friends to soul-mates with no problem.

Be My Valentine
It doesn’t snow that often in Irving, Texas, Danielle says. So when a blizzard blew into town before Valentine’s Day weekend 2010, the whole town shut down and Danielle and Brandon’s romantic weekend plans were foiled. Brandon did have one surprise left for his sweetheart though. He had ordered a collection of Valentine’s goodies — flowers, candies, the works — to her office, but with the snow on the ground, and no one in her office, Danielle headed home before her package came.

When she got home, Brandon spilled the beans and drove her back to her office to collect the goods. When they returned to their place, roses and candies in tow, Brandon turned to Danielle and opened a little ring box. Danielle was floored.

“He had the ring box and he was just cheesing from ear-to-ear,” Danielle giggled. “I was just too excited. I was really surprised because it was two days before Valentine’s Day. If anything was going to happen, I thought it would happen on Valentine’s day. I was totally caught off-guard.”

Do-It-Yourself Goddess
Being that she’s an interior designer, Danielle loves to get a little crafty. It was important to her that she add some personal touches to her wedding day. The best way to make that happen, she thought, was to do it herself. So the bride put together all of her wedding stationery, designed the broom that she and Brandon would jump over, and touched up the table numbers and votive holders for the reception. Here are some helpful tips from the D-I-Y bride.

On her broom: “I looked up brooms online. They were just really fussy and I didn’t think they were cute at all. I’d seen the little stick brooms at Michael’s and Hobby Lobby (both craft stores) and those cost like two dollars. So I bought one and added the peacock feathers and the ribbon to it.”

On her stationary: “It was pretty easy to make my invitations. I just went to a stationary store and got the pretty metalic papers. I created the look in Adobe Illustrator. It’s easy to do, just as long as you keep it consistent. I tried to keep the same motif throughout a lot of my stuff so that it didn’t look homemade.”

On helping hands: “I made stuff with the help of my bridesmaids and my mom. Without their help it wouldn’t have been as much fun. We wrapped the little votive candle holders with music paper in one night. I could have easily done all that stuff myself, but it was more fun with them.”

On personalizing her wedding: “I do think doing stuff yourself is more affordable, it’s [also] more for the experience of having stuff to do instead of buying everything. It was easier to get it more personalized.”

Click through Danielle and Brandon’s Bridal Bliss story to see all of their personal touches.