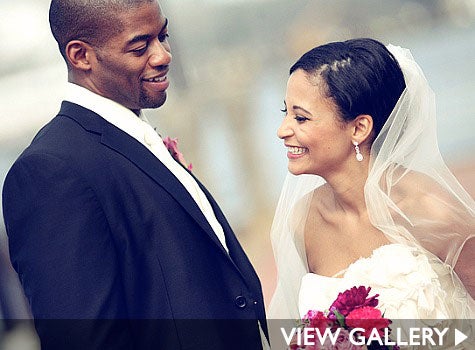 Bride: Dana Dillon-Townes, 31 Groom: Nonye Onyewu, 35 Occupations: Dana — Brand Manager for Redken, L’Oreal; Nonye — Director of Personal Training Program Hometown: New York City Wedding Ceremony Location: St. Paul’s Catholic Church, Portsmouth, Virginia Wedding Reception Location: Portsmouth Renaissance Hotel, Portsmouth Virginia Wedding Date: July 31, 2010 Gym Buddies Dana and Nonye met at the campus gym at Virginia Tech, where they were both students. She taught aerobics and he worked at the facility. For years, their relationship was strictly platonic. They would see each other frequently at different events with mutual friends. Then one day they both agreed that they should spend more time together alone. Pretty soon they were in love. “Dana is the only woman that I ever dated that I was actually friends with first,” Nonye says. “When you’re actually genuinely friends, you pretty much accept things and you can actually be yourselves.” Why I Love You So Much “I think our friendship was a huge part of it for me,” Dana says. “Nonye’s very much involved in his family. He and his brothers and sisters are so close and so supportive of one another. It just touched me.” “Dana was the coolest girl I ever dated. She’s smart. She has a good head on her shoulders and she aspires for greatness,” Nonye says. “We definitely got along together. It was never forced. It was easy for me to relax and be cool.” Change of Plans After seven years of dating, most of which was long-distance, Nonye planned a big party at a venue on the National Harbor in Washington D.C. for his 34th birthday and told all the guests that the party would also serve as his and Dana’s engagement party. The plan was to propose to his girlfriend after dinner at a beautiful waterfront restaurant, but when the food and service at the restaurant miserably failed to meet his expectations, he and Dana left early and his plan was squashed. He had to think quickly. Back at the hotel, as they were getting dressed to go to the party, Nonye got down on bended knee and asked Dana to be his wife. “I cried. I was shocked,” Dana remembers. “It was really reassuring.” Favorite Things What makes her smile: “Nonye laughs hysterically at funny movies. I love it. It makes me smile every time.” What makes him smile: “I like the way she says ‘Hey, baby’ first thing in the morning.
It’s a good way to start my day.” Her favorite thing about his personality: “I love his ability to let things roll off of him, to brush himself off and keep going.” His favorite thing about her personality: “That it perfectly evens out mine.” Her favorite physical trait: “He has this scar on his arm that he got from playing football when he was an undergrad. When it happened he kept playing even though it hurt and needed stitches. And that’s so Nonye — passion in everything he does.” The first time he said I love you: “We were at her apartment at Virginia Tech and I was thinking about how compatible we were and it just came out. I didn’t even think about it. I think I actually fell in love with her before she was in love with me. I knew eventually that she would realize my greatness [laughs].” Dana and Nonye celebrated their union and tied the knot in a fabulous celebration with nearly 600 guests. Share their love.
Loading the player...