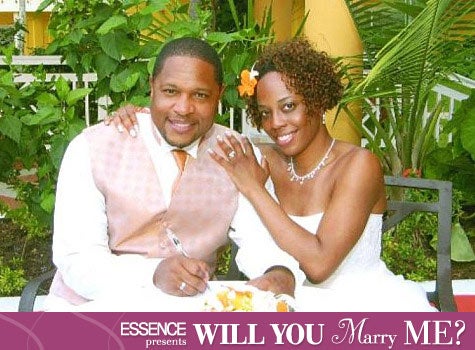 My man and I had been together for about 6 years. He had been married before and was nervous to take the plunge again and I understood that. However, since I really wanted to spend my life with him and knew he felt the same way, I had no problem popping the question. I’m a very non-traditional woman to begin with and I thought it would be really ‘cool’ and would make him feel special and let him know how much I loved him. So, I put my plan into effect on Father’s Day, 2005. My man had always been a excellent father to his daughter (from his previous marriage) and to my son (from a previous relationship); he always did all he could to make me feel special and he always treated my son like he was his own, so I felt Father’s Day would be the perfect day to let him know how appreciated and special he was to me. I proposed to him the way I would want to be proposed to. I arranged everything in advance. I started the plans by taking him and the kids to the park for a picnic. We sat on a blanket had lunch and fed each other strawberries and whipped cream while the kids played. While at the park, my cousin went to my house and sprinkled rose petals around the house and lit candles. She also drew a bath. When we arrived home he was confused by seeing my cousin there. I told him it was our time and she would be taking the kids with her. Upon entering the house he saw the beautiful scene. He smiled from ear to ear. We proceeded to take a bath and while in the tub I told him how much I loved him and wanted to spend the rest of my life with him. Then I pulled out the engagement ring I’d bought him and slipped it on his finger and asked if he would marry me. He was in shock and so flattered. He didn’t hesitate to respond “Yes.” He let me know how much he enjoyed that night and was truly flattered that I would do that for him. He bragged about it to his friends. We married in March 2006 and are coming up on our fourth wedding anniversary. The day of my bridal shower, my husband surprised me with my own engagement ring in front of my family and friends. I didn’t expect it at all. My best friend threw me my bridal shower and she and him got together and planned it. So, even though I proposed first, he still made sure that I had a ‘proposal’ too. I think nothing is wrong with the woman proposing to her man. I also think any confident man wouldn’t take offense with a woman proposing to him. He would look at it like my husband did and be flattered. If you love your man and want to spend the rest of your life with him and you know he feels the same way, why not? It’s the same thing you’d want him to do for you, what’s wrong with doing it for him? He’ll appreciate it and he won’t forget it, trust me. For women considering to propose to their boyfriends, I’d say, “if that’s the person you want to spend the rest of your life with, then you should go for it. But, just like a man would, be prepared for if he says no. If he says no, then that’s OK. At least you took that chance. What do you think? Would you propose to your man? Read more: