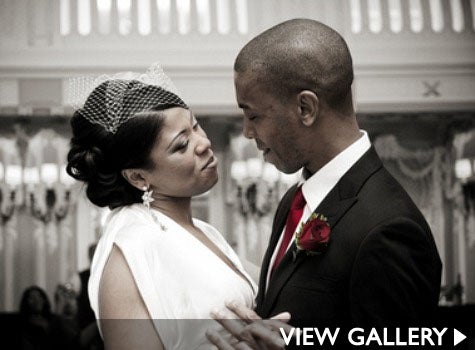 How They Met: The two met in 2005 at a Kappa Alpha Psi Fraternity event in a New York City art gallery. “Monique was easy to spot because she stood out,” Sean said, “even in a crowded room.” The two started to talk, but according to Monique, his emails, phone calls and interest soon dissipated and the two lost touch for several years.

Reconnecting: In 2009, Sean spotted photos of Monique on Facebook from a pre-Valentine’s Day party that both attended. “I stopped at her photo and smiled at the vision on my screen. I hadn’t seen her in over four years,” said Sean. A new chapter in their relationship began.

The Proposal: It wasn’t long before Sean realized that Monique was the one. He prepared to pop the question during a trip to the Dominican Republic for a friend’s destination wedding. However, the Icelandic volcano of April 2010 grounded their flight — putting his plans on hold. Some time later, he planned on getting on bended-knee during one of Monique’s business trips to Atlanta, but he was involved in a head-on collision on his way to Georgia that completely totaled his car. Luckily, he walked away with only a minor head injury and left the ER more determined than ever to make Monique his wife.

The next morning he boarded a flight to Atlanta, and as the couple enjoyed a romantic breakfast in bed — with Beyonce’s “Halo” softly playing in the background — Sean asked Monique to marry him.

First Impressions
She Said: “Sean was a perfect gentleman, confident, yet polite, not to mention tall and handsome.”

He Said: “My first impression of Monique was the girl in the club that every man wanted to get the number of. After getting the number, my impression changed to her being an ambitious woman in a big city ready to leave her mark on the marketing industry.”

Falling in Love:
She Said: “Sean is incredibly well-rounded. He’s a manly guy in the traditional sense: a good provider, family man, etc. With that said, what’s most remarkable is that he’s also a great cook, has an eye for fashion, and won’t blink when I ask to go see an art exhibit or chick flick.”

He Said: “What made me fall in love with Monique is her natural charm, her spirituality and the sense of comfort she gives to me.”

“I Love You”
She Said: “We were on Broadway seeing ‘Phantom of the Opera’ for his birthday. We’d just left a fabulous dinner at Chez Josephine’s (owned by Josephine Baker’s sons). The play was just about to start and I turned to him and said, ‘There’s something I’ve been wanting to tell you, I love you.’ He smiled with his eyes and said he already knew that. Then the curtain went up and the play began.

He Said: “We were at our first Broadway play. It was a great evening. We had a wonderful dinner and Monique surprised me with a gift of all gifts. When the curtain rose, she whispered ‘I love you.’ I thought for a few minutes and reflected on our relationship to that point and the future of the relationship. My prior thoughts of being in love with Monique were confirmed. I could not wait to the end of the play, so I leaned over and whispered to her ‘I love you too.'”

Favorite Memories:
She Said: “Sean is originally from Poughkepsie, NY. One Saturday afternoon in the summer of 2009, we took a drive and he showed me around his hometown, sharing funny stories all along the way. We went by the house he grew up in, the school where his mother taught, his high school and his old hangouts, and he took me to his favorite resturant. It was the perfect day and gave me an important glimpse into his childhood and how he was raised.”

He Said: “My favorite memory with Monique is when she met my family. She fit right in like she had always been a part of my family.”