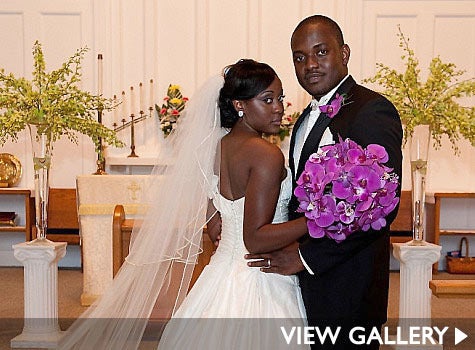 Bride: Maame Sarpong, 28 Groom: Albert Adomako, 32 Hometown: Bristow, Virginia Wedding Location: Ceremony–Episcopal Church of the Transfiguration, Silver Springs, MD; Greenbelt Marriot, Greenbelt, MD Wedding Day: August 29, 2009 Girl Next Door: Maame and Albert, who are both from Ghana, met at the bride’s cousin’s home who had invited her over for jollof rice (a traditional West African dish). Not knowing that they were expecting company, she hadn’t fixed herself up. Nevertheless, Albert was blown away when she answered the door with no makeup and her hair wrapped in a headscarf. “I stood there staring at her not saying anything for a couple of minutes,” Maame’s new husband said. “I was with my friend and I told him, this is it. She’s my soul mate.” Clear Connection: Embarrassed that she wasn’t looking her best, Maame rushed out of her cousin’s house without exchanging phone numbers with Albert. They both pestered Maame’s cousin for each other’s information for months before giving up. As fate would have it, they found each other again on then popular social networking website Hi5.com. “I was like, ‘Oh my God! That’s the girl!’ Albert remembers. After a few weeks of chatting online and on the phone, Maame typed in her Instant Messenger text box, “I have a crush on you.” Laughter Is Good For The Soul: Although they had committed the traditional Ghanaian engagement ceremony, which required Albert to ask Maame’s family for her hand in marriage, the groom still wanted to propose to his bride in Western fashion. He chose a short vacation in Vegas as the right time. Sitting at dinner at the Eiffel Tower restaurant, Maame and Albert finished up their main courses. Refusing dessert, she was surprised when their waitress strolled over with a platter. “She opens the platter and all I see is Albert down on one knee and someone taking pictures,” Maame says. “I honestly don’t know what he said because I was in shock. I just started laughing out loud.” “I told her how special she was and how I wanted to spend the rest of my life with her,” Albert recalls. “She was laughing hysterically. I was like, ‘why is she laughing? Is she going to say no?'” “I said yes without even hearing what he had to say, because I was laughing so hard,” Maame giggles. Share Maame and Albert’s wedding story… Related stories: