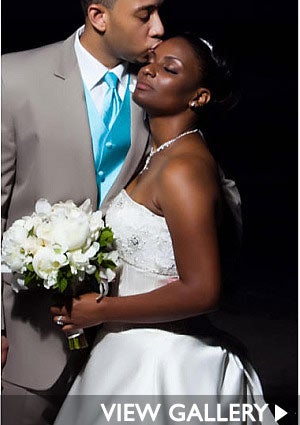 Bride: Chari Brooks Groom: Carlton Horton Hometown: Virginia Beach, VA Occupations: Brooks–Pharmacist, Horton–Banking consultant Wedding Location: Fontainebleau resort, South Beach, Miami Wedding Date: July 11, 2009 Looney Tunes for Love: When Carlton met Chari in ninth grade P.E., neither of them had any idea that they would ever even want to be together. Still, Carlton says he saw something in her even back then. “She had the brightest smile and the most cheerful attitude I had ever seen,” Carlton wrote in a special story for the couple’s wedding guests. “It wasn’t however her beauty or personality that intrigued me. It was her socks! She had on a pair of colorful Looney Tunes socks pulled up to her thighs. At that point I knew any girl that beautiful, with an attractive smile and the confidence to wear cartoon socks on the first day of school, I had to meet.”  The Next Phase: Carlton asked his future bride out on their first date at Chari’s high school graduation pool party. The teenagers went out to eat that same night and became inseparable during the following summer. “Once we got together, we were together ever since,” the new wife remembers. Waiting for the Right Moment: Carlton bought Chari’s ring a year and a half before getting down on bended knee. When he was ready to pop the question, he wanted to catch her off guard. “I wanted it to be on a day that she wouldn’t suspect anything. It was Mother’s Day, and we were getting up early in the morning because we were going to take our mothers out. She was coming out of the walk-in closet and she turned and I was already down on one knee,” Carlton relays his proposal story. “She thought I was on the ground looking for something and she was about to get down on the ground and help me look. That’s when I surprised her and I pulled out the box. She started to cry. she was so excited.”   In Our Own Time: After learning that they were going to have their son Amir, Chari and Carlton kept cool and decided to wait until they were ready to tie the knot instead of letting their circumstance pressure them into young marriage. Chari thinks it was one of the best decisions she and her husband made. “We wanted to do it when it was right for us, not for anyone else or for the wrong reasons,” Chari explains. “We took our time. We’ve grown together. After a while we just knew it was the right time.” Share their love. Read More: