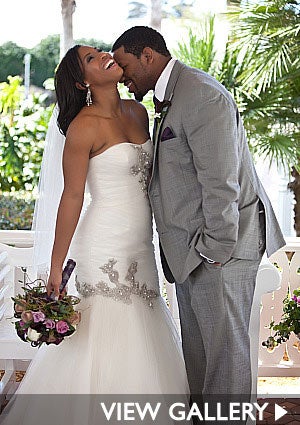 Bride: Tiffany Robinson, 28 Groom: Darryl Tapp, 26 Hometown: Philadelphia Occupations: Robinson: Personal trainer and group fitness instructor; Tapp: Philadelphia Eagles Defensive End Wedding Location: The Wedding Pavilion at Disney World, Orlando, FL Wedding Date: February 20, 2010   Sent From Heaven Darryl and Tiffany both made lists of the qualities they wanted their ideal mates to possess and prayed for God to help them find the ones they were looking for. On a sunny June afternoon, at a church cook out, God brought them to each other. “I prayed for a man who loves God, who’s respectful, who’s hard-working, who’s diligent, who’s caring and that’s everything that Darryl is” Tiffany says. “When I got out of my last relationship, I saw the things that I didn’t want,” Darryl says. “So I made a list and prayed for a God-fearing woman who’s athletic and has a strong family background–and I found her.” Second Chances Darryl says that the first time he tried to kiss Tiffany, on their third date, she missed his signal and went in for a bear hug instead. The next time they hung out, the footballer made sure she caught his pass. “I didn’t miss the alley-oop that time,” Tiffany remembers. “Our first kiss was pretty magical.” The Morning After After months of hinting to Darryl for a ring, Tiffany thought her boyfriend was ready to pop the question on Valentine’s Day. She wasn’t entirely right. Darryl flew Tiffany first class from Seattle to his homestate, Virginia, and drove her to the W Hotel in Virginia Beach. On the night of February 14, after a spa appointment, a new dress, a four-course dinner and a comedy show, Tiffany expected a ring for the grand finale, but the evening ended without the bang she had hoped for. “I guess my hopes were up,” Tiffany says. “He squashed them.” The next morning, as they were checking out of their hotel suite, Darryl asked a hotel employee to take their photo, before Tiffany could say, “Cheese!,” Darryl was down on one knee. “He gets down on one knee and says a whole bunch of stuff that I don’t think I even heard and then he said, ‘Will you be my wife?'” They got engaged on February 15. They share their magical day with us… Read More: