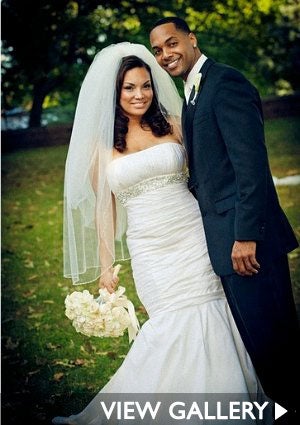 Bride: Celebrity Radio/TV Personality Egypt Sherrod, of Egypt Said So Groom: Mike Jackson Home State: New Jersey Wedding Location: West Mount Country Club, Garret Mountain, New Jersey Wedding Date: September 11, 2010 Love in This Club: Mike saw Egypt numerous times at various social gatherings in New York City and New Jersey. He was enamored by her from the first time he laid eyes on her. “I was totally floored,” he says. “I had to know who she was and I knew from that day that she would be my wife.” When Mike did approach her, she blew him off. “I would not give him my telephone number,” Egypt remembers. “I was in a space where I wasn’t feeling men.” Finally one night, November 3, 2005, Mike heard on the radio that Egypt would be hosting a party at Octagon in NYC. He enlisted a friend to help him find his girl. At the club Mike watched Egypt descend from the top of the stairs and without knowing what he was doing, he grabbed her arm. “I turned to her and said, ‘Do you have a good memory?’ “When he grabbed my arm, I thought, ‘Yes!'” Egypt exclaims. “You were going to give me your number the last time I saw you,” Mike said. “Well, I’ll give it to you tonight,” Egypt replied. “It was perfect timing,” Egypt adds. “By that time, he cleaned his life out from all the Ms. Wrongs and I cleaned my life out from all the Mr. Wrongs.” Scary Movie: For their first date, Egypt suggested they go to the movies. Wanting to snuggle up to the lady of his dreams, Mike proposed that they watch “Saw.” Before they even got to the movie theater, Mike had won Egypt over. As she walked down the street to meet her date, she saw him standing on the corner with a gorgeous bouquet of red roses. It was over. “After that first date, I was just in love,” Egypt says. “We were inseparable.” “Pass the Ketchup” When it came time for Mike to pop the question, he choose the low-key route. He took Egypt to a picnic on the beach and asked for her hand. “It was, ‘Pass the ketchup. Will you marry me?’ Egypt jokes about her husband’s proposal. Still it was an offer she couldn’t refuse. Egypt and Mike declared their love and devotion in a gorgeous outdoor wedding ceremony at the West Mount Country Club on top of Garret Mountain in New Jersey. Share their love.
Loading the player...