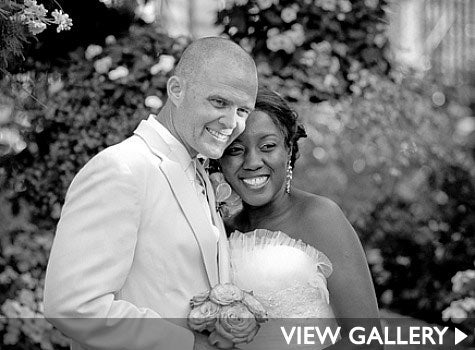 Bride: Carol Asali Groom: Kris Wilhelm Hometown: Newport Beach, California Wedding Date: September 20, 2009 Wedding Location: Shaman Gardens, Corona Del Mar, California Meant to Be Kris fell in love with Carol’s voice when he heard her band sing in a church concert in Irvine, California. Months later, Carol joined his church and his Bible study and the two finally met. It would take months of nudging from Carol’s friends for them to get together. Once they did, the realized they were a match made in heaven, meant to be together all along. “In Bible study, he used to look very interested in what I had to say, but for a few months he never said anything,” Carol remembers. “I had already started liking him and everyone kept saying ‘I think he likes you.’ When he finally asked me out, I was very happy.” In spending time with Kris, Carol learned that he did mission work in her home country of Kenya, helping support and bring supplies to an orphanage for children affected by AIDS in a small town called Kitale. When things began getting serious between them, Kris added another stop on his Kenya visit, stopping in Nairobi to meet his lady’s family. “At first, I didn’t know if my parents would get it, because every parent has a person in mind that they thought their daughter would marry and I didn’t know if they’d say it’s not a good thing to mix cultures,” Carol explained. “In the end, my mom loved Kris because he is very genuine.” Put It In a Love Song Carol’s birthday is right before Kris’s. He decided not to propose on her birthday and to do it on his instead, just to throw her off. So, on Kris’s special day, Carol planned a picnic on the beach for the two of them. Little did she know he had some plans of his own. Kris nervously rushed through the picnic and told his soon-to-be fiancee he was taking her out to dinner that night. When he picked her up for dinner he made a pit stop at an office building. She followed him inside where they found a recording studio. Kris played the piano and sang a song that he wrote for Carol and then asked for her to be his wife. “I was in tears,” Carol says of her engagement. “I had put on a lot of makeup before we went out. By the time we went to dinner, my eyes were red and there was no makeup on my eyes at all,” she laughs. One Big Happy Family Kris had been married before and has two children, a 13-year-old son and an 11-year-old daughter, that Carol thinks are great. When she started getting close to Kris she decided to meet and get to know his ex-wife. “When we started dating, I wanted to get to know her just to let her know, ‘Hey, I’m going to be around your kids. You should know who I am.’ I heard her side of the story and it was exactly the same as Kris’s.” Around the World Carol appreciates that Kris was honestly interested in her and not just curious about a woman from another culture. “He’s someone who already understands a different culture and is not doing it out of curiosity,” she says. Actually, Kris keeps her in touch with Kenya and now the two of them help support the orphanage in Kitale. “There’s a change we have to make in the world and we will make it together,” she says firmly. Check out photos of Carol and Kris’s multi-culti wedding. Read More: