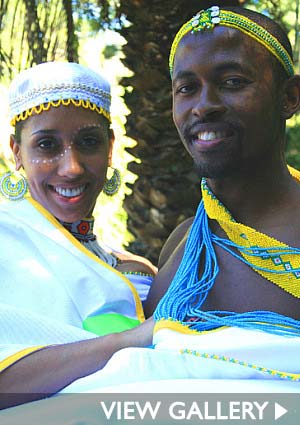 Chance Encounter:
Nicole met Ezra in the hustle and bustle of New York’s financial district. She was headed back to work when the young actor–who’s recent credits include “Miracle at St. Anna” and “Invictus”–approached her and entertained his chat about being “new to town.” She took his card and went back to work, but not before he had a chance to give her a hug. Four weeks later, Ezra spotted Nicole at a music event in Brooklyn’s Fort Greene Park. He confidently approached her and invited her to another event that night. A few days later, they had lunch and shortly after that, found love.

Inspiration:
Ezra wrote a poem for Nicole that appeared in their digital photo album.

Your strength for me is timeless.

Together with your sense and sensibility
And that creation-woman femininity

Now I know the best things in life are priceless

I have no fear
How we shall fare

For our love
Is from above

with soo many kisses
Niki, I will cherish you wholeheartedly as my …Mrs.
-Ezra

Diamonds are Forever:
When Ezra put a ring on it, he made sure the diamond he gave Nicole was clean.
“Ezra presented me with a lovely, modest, conflict-free diamond engagement ring set on a platinum band,” Nicole said. “We complimented it with a conflict-free diamond eternity band. Both rings were designed and purchased in South Africa.”

Unbreakable:
Nicole told us about when she knew Ezra was the one:
“After we had been dating for almost a year, we hit a rough patch. I was working 12 hour days, sleep deprived and irritable most of the time. Throughout this period he remained consistent, he helped me with my work where he could. There were days when I would skip meals and he would invite me over for a nice warm meal. There were occasions when he actually stayed up all night with me to help me finish projects for work. I had never encountered a man who would give so selflessly before. I also recognized that for the first time, I was in a relationship where my man’s expectations of a relationship mirrored my own. There was no ambiguity or second guessing. we spoke candidly about what we wanted in a relationship.”
Find out more about Ezra and Nicole’s Love story and view images from their wedding ceremony in South Africa and their reception in Philly.