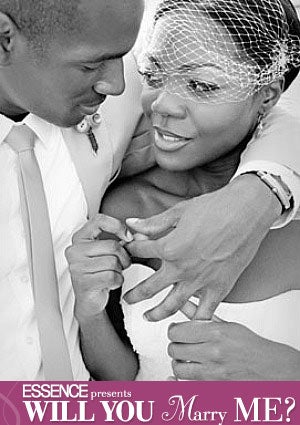 Bride: Cynthia Etonga, 28 Groom: Lester Andrew, 31 Occupations: Etonga–Lawyer; Edwards–Student Loan Coordinator Home Base: New York, NY Wedding Date: August 16, 2009 Wedding Location: iCi Restaurant, Brooklyn, NY Right On Track Cynthia and Lester were riding the same subway train and got off on the same stop. She continued to listen to her mp3 player and ignored him when he tried to talk to her. But when he told her he had seen her on campus at Fordham University, she let her guard down. He invited her to his friend’s retro reggae party and after feeling the vibes for a few weeks, she became his main ‘ting. “I thought for the first two weeks that he was just promoting his friend’s party. But then, after we got together, there weren’t any games. Three years later we got engaged. Rain Forest  Lester and Cynthia got engaged during their second trip to Montreal. Cynthia was dying to go to a botanical garden that her mother had visited ten years earlier. While strolling past the flower patches, it began to downpour and the couple ran for the shelter of a pavilion in the Chinese gardens. Lester asked a passerby to take their photo despite the rain and then he got down on one knee and popped the question. “The rain started to slow down a little bit and I wanted to run back to our hotel room before it picked up again. But Lester said, ‘no, let’s take a picture.’ He asked the guy to take another picture and I’m thinking, ‘This dude is not your personal photographer. We gotta go.’ Then he got down on one knee and the sun came out and I was confused and then I was bawling. The guy who took the photos’ girlfriend was even crying.” Me Time  Cynthia attributes her feeling calm on her wedding day to her mother and sister leaving her alone to relax on her big day. “They told me to rest and trust that everything is being taken care of and I really trusted them. I got to be in my room by myself. When it came time for the wedding, I was so happy and relaxed.” Running Lines The couple wrote their own vows. But when it came time to repeat them they both forgot what they wrote. In the end, they found the right words to say. “I just basically said how I felt about him and how he makes me feel.” Web Master Cynthia and Lester found a lot of the extras for their wedding on Etsy.com, a kind of retail Facebook that allows shoppers to buy products directly from small business owners. Using Etsy allowed them to find very unique accents for their kitchy and cute wedding and saved them a lot of money.   “I love Etsy. It’s so affordable. I’d say 80 percent of what we used for our wedding, we got on Etsy.” Save VS. Splurge Cynthia says to stay within budget, brides should allow themselves to spend on the things that they can’t live without and be willing to scrimp on other things. Cynthia splurged for a great photographer and saved on a DJ, by having friends compile a mix for their iPod.; “Figure out what’s important to you and don’t compromise there.” View photos of Cynthia and Lester’s joyous occasion. If you or someone you know would like to be the subject of a future Bridal Bliss feature, write to us at relationships@ESSENCE-online.com and tell us your love story. Be sure to include a photo of you and your new husband. Read More